Despite being charged with a ten months sentence, 11 political prisoners are considered heroes of Papuan people 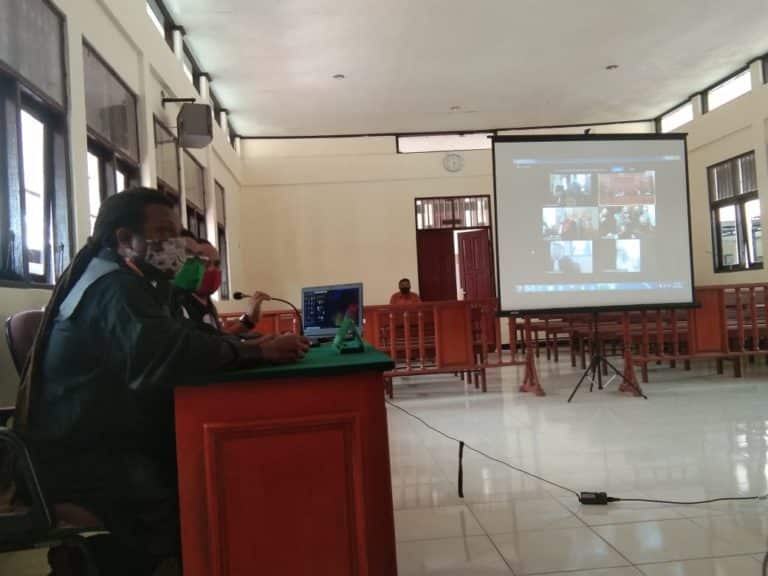 The trial to read the verdict towards eleven political prisoners in Sorong. - Jubi/LBH Kaki Abu

The Chief of the panel of judges Willem Marco Erari and two members of judges Donald Sopacua and Dedi Sahusillawane said the defendants had been legally proven to have committed crime under Article 110 paragraph (1) of the Criminal Code in conjunction with Article 87 and Article 63 of the Criminal Code following the indictment of the public prosecutor.

Fernando Ginuny, the coordinator of the legal advisor team for the eleven political prisoners, said prior the public prosecutor charged the defendants with a year and four months’ imprisonment. But the panel of judges decided to give a ten months sentence instead.

“Because our clients already accepted the verdict, we will concern the next arrangement to release them as soon as possible. We expect the government, in this case, the Indonesian Police, to pay more attention to supporting evidence of such criminal acts before determining people with treason. Otherwise, Papuans will become the target of criminalisation by police officers,” he said in a release received by Jubi on Thursday (17/9/2020).

Further, he continued that from some cases handled by LBH Kaki Abu, all were related to criminalisation by police officers, but, then were determined as an act of treason by the police.

“This is a mistake, which turned Papuans to always harbour hatred to the State because the police are not professional in carrying out their duty. As a result, Papuans always feel unfairly treated by the State,” he said.

In the meantime, Natalis Yewen, General Coordinator of Forum Peduli Keadilan Bagi Monyet (Forum of Justice for Monkeys), thanked God and the entire Papuan people for the light sentence.

“Representing my fellows in solidarity, we accept this verdict by the panel of judges to the eleven Papuan heroes,” he said.

According to Yewen, for the State, the eleven defendants might be political prisoners but, for indigenous Papuans, they are their heroes because the defendants were arrested and detained for voicing the problem faced by Papuans. (*)

Police Was Two Hours Late to Respond to Fire Incident