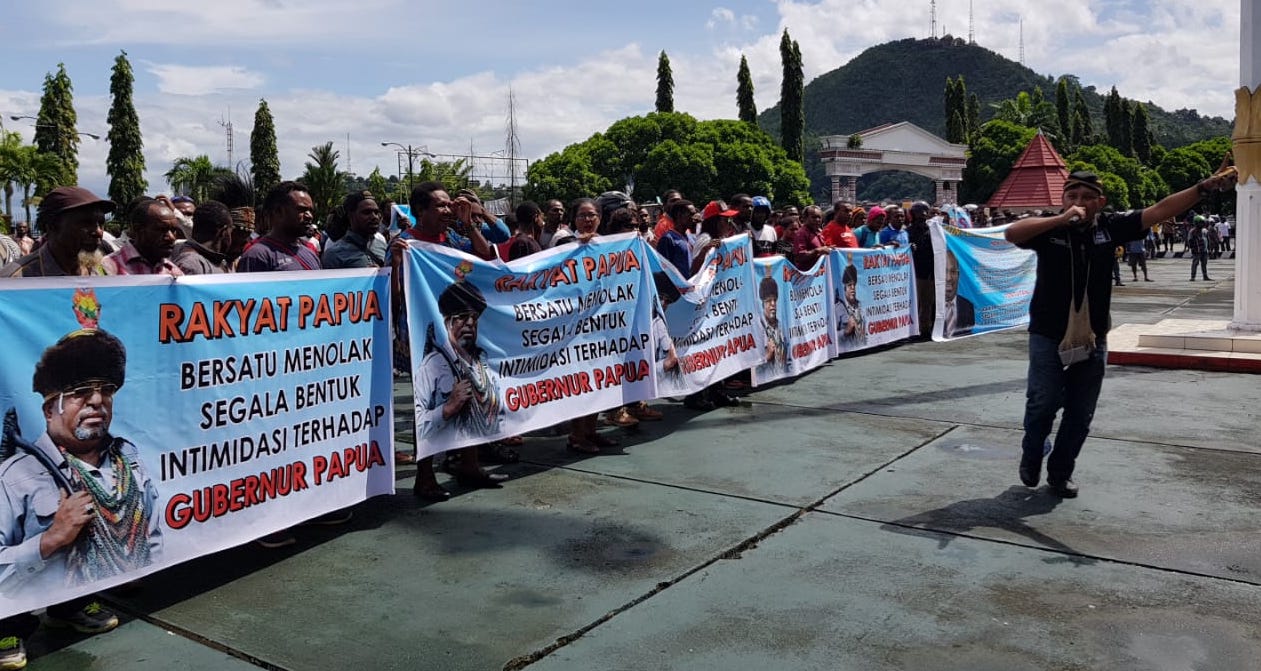 Papuan people in the demonstration to defend Papuan Governor Lukas Enembe who allegedly intimidated by the KPK. – Jubi/IST

The mass coordinator Benyamin Gurik claimed the Central Government has a big scene to pulling down the governor by using the issue of corruption. “This intimidation scenario has been played (by the central government) since the governor’s prior administration. They tried multiple strategies to defeat the governor. Of course, as citizens, we are very upset. Because we knew that Governor Lukas Enembe has a sincere heart and high-commitment to build Papua,” he said.

Gurik also thought that because of his determination of every policy he made, it made some people feel unease because they could no longer manipulate the budget because now everything should be executed according to the rules.

“Because of his strictness, Papua was able to receive the unqualified opinion upon the financial report from the Audit Board of Indonesia (BPK)” he said.

“And also because of him, we can get 10 per cent of Freeport share. Shortly, under his leadership, many people in the central government are not able to steal from Papua. Therefore, they will do anything to stop him,” he continued.

Earlier, Stefanus Roy Rening, the attorney of Papuan Provincial Government, asked the KPK to stop the criminalisation against the Papuan provincial officials and using the issue of persecution against their two officers to cover their failure in a sting operation or ‘Operasi Tangkap Tangan’ in Borobudur Hotel.

“This (persecution) happened because of something, and the KPK must reveal this transparently, fairly and openly to the public. They have to reveal what has been done by their officers in the Borobudur Hotel which triggered this incident,” said Roy.

“Now the KPK attempts to switch the issue of the failed sting operation with the persecution of their officers. I think it’s not fair because what has happened is because they are not professional to misuse their power and authority and use the law to scare the people,” continued Roy.

Until this news is writing, the protest is continuing peacefully and causes traffic congestions in some streets such as Jalan Sam Ratulangi and Soa-Siu Dok II. Meanwhile, hundreds of police officers stand by along the road and location where the demonstrators gathered. (*)