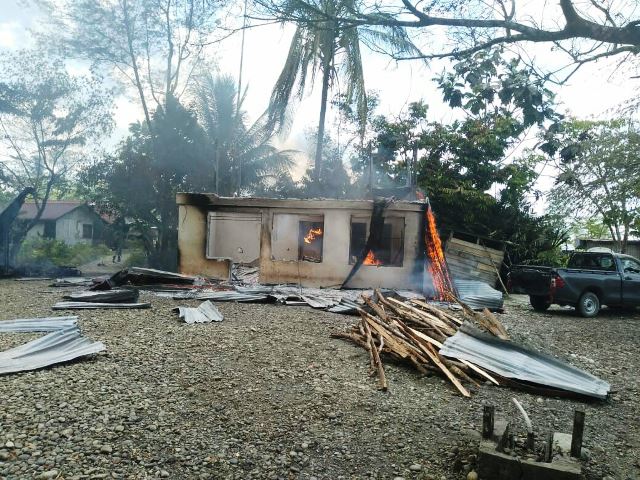 Jayapura, Jubi – Security situation in Dekai, the capital city of Yahukimo District, is getting recovered gradually. However, public activities in this town still not running well after the dispute involving residents a few days ago. Streets and the centre of the crowd are reportedly abandoned.

“Many people still decide to stay outside of the town. Schools, offices and shops are still closed. “I had a little walk this morning and only met some people riding their motorbikes,” a Deyai resident Nias Baye told Jubi by phone on Tuesday (9/10/2018).
He hopes the government of Yahukimo District to appeal residents returning to their homes. “The clash is over, but many residents are worried about their safety. Therefore, they choose to remain in their shelters. Shops should also be reopened so that we can buy our necessities and other things,” he said.
The clash triggered by a traffic accident occurred on Saturday that led to a dispute between two groups of citizens in Dekai for three days, from Saturday to Monday (8/10/2018).
Actors allegedly take benefits of the situation
Papuan legislator from Yahukimo District Sinut Busup suspects someones who take advantages of the clash situation. He said the traffic accident should possibly resolve by law, but what has happened was the two groups of citizens involved in the dispute and resulted in many casualties including many injured people and material loss.
“I suspect there are culprits behind the action who provoke the community for their interests,” Busup said on Tuesday (10/10/2018).
According to him, the police must investigate, reveal and arrest the perpetrators who provoke people that triggering a dispute. Moreover, he said another impact of this incident is students and pupils studying in other regions are worried and anxious about an unexpected situation in their hometown.
Meanwhile, Yahukimo Regent Abock Busup said the security forces are coping with the clash in this region. “At the moment, the situation in Yahukimo is safe and under control. I have already communicated the security forces asking them to investigate this case thoroughly,” the regent told Jubi by phone on Monday evening (8/10/2018).
He further said he wants this case to take to the court and not through the customary fines or an amicable solution. “I ask the person who triggers this conflict to be arrested and taken to court,” he said.
Law is a key solution
In response to this issue, a member KPMY (Yahukimo Students Community) in Jayapura Habel Pusop said their concern over the clash in their hometown that has taken many casualties.
“We are very concerned about the current situation in Yahukimo. At the moment, the situation is very tense that makes people uneasy. The government activity is not running well, so, we are in Jayapura feeling very sad,” he said.
Furthermore, he said this incident should be determined by law. People who found guilty in this incident must be treated by the Indonesian Law so that people can return to their normal activities without feeling worried.
“The problem was triggered by only one person, but the impact of revenge caused many casualties from both sides. As a student, we care, are upset and sad at the same time,” he said.
Finally, he asks all Yahukimo students throughout Indonesia, especially those studying in Jayapura City, are not provoked by many fake issues or hoax news about this issue.  (*)
Reporter: Piter L, Arjuna P, Hengky Y
Editor: Pipit Maizier
Dekai social conflict Yahukimo

THE PROVINICAL GOVERNMENT WOULD NOT HINDER THE LEGAL PROCESS OF KPK