Dealing with malnutrition and measles in Asmat 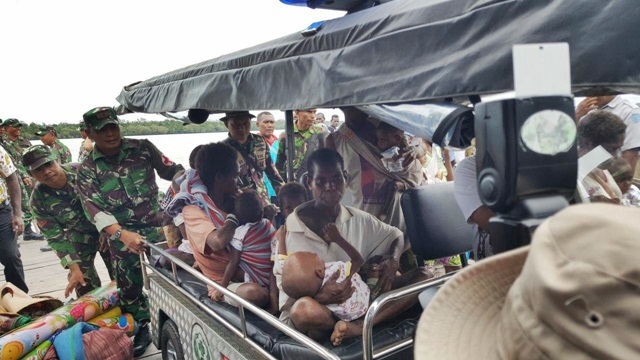 Jayapura, Jubi – When the attention of the central government was absorbed into the case of malnutrition and measles outbreaks in Asmat Regency, a similar incident that resulted 23 toddlers’ dead has been arisen from Pegunungan Bintang.

Head of the Papua Police Public Relations A.M Kamal said eleven of fourteen children are diagnosed with broken legs and hands, while two were infected with measles.

Before evacuating, a team of four personnel and one motorist delivered medical supplies and foodstuffs from Bhayangkari Region of Papua, Bank Papua, Bank BRI, and other agencies. The stuffs were include biscuits, milk for toddlers, mineral water, rice, and cooking oil.

Papua Police Head (Kapolda) Inspector General Boy Rafli Amar also briefly visited the Atsi sub district to observe the on the spot conditions, including to see the children who exposed to measles and Malaria and their mothers that were being treated in the Atsi Sub-district Health Center.

Kapolda said, the malnourished patients who had been evacuated by the task force team will get a better treatment.

As quoted by Antara, Kombes Pol A.M. Kamal explained that the Integrated Task Force of Polda Papua held a treatment for 472 Asmat people with measles and malnutrition who live in eight villages in Asmat District.

“Of the 472 patients who received the treatment, ten were referred to Puskemas (health centre) Atsi with a diagnosis of measles, dehydration and malnutrition; and immunized citizens of 112 people. In early January there were five children who died there due to measles,” he said.

Outbreaks of measles and malnutrition that have occurred in Asmat Regency since September 2017 have caused 68 children and under-fives to die. This report caused Jakarta to be shocked then mobilize the team to overcome the situation.

Regent of Asmat Elisa Kambu acknowledged, since September 2017 Health Office of Asmat Regency records the presence of measles disease. But just 23 December they had received a report from the Bishop of Agats, Aloysius Murwito of the children who died in Kampung As, Pulau Tiga District.

“I myself also found a toddler who died and dozens of children suffering from measles and malnutrition in Kampung As and Atat, then I immediately had ordered the head of health office to overcome it,” said Kambu during a coordination meeting with the Presidential Staff Team (KSP), Health Ministry team, Ministry of Social Affairs, Papua Province, TNI and Papua Police on Wednesday, January 16th, as quoted by Antara.

According to the Regent his team had started work on January 1st to January 11th and has treated hundreds of patients with measles. A total of 393 of them were outpatients and 175 had to undergo hospitalization.

“There are obstacles that occur when dealing with this outbreak, there are only 12 doctors and one special doctor in Asmat,” he said.

From 16 health centres (Puskesmas) which are scattered, only seven have doctors. Lack of health equipment and distances far apart had contributed to the shocking number of victims.

Father Hendrik Huda, who accompanied the Presidential Staff Office (KSP) team, said that the district of Asmat is almost 90 percent water-covered and all its citizens spread across 23 districts (sub-districts) living on the banks of the river.

“Most of them live and eat directly from what nature had provide, looking for fish and sago, they often leave their houses by the paddle boats with their families down the river and make small huts to live for food, this livelihood that makes them need to go far to get good nutrition,” he said.

Meanwhile, Yan Akobiarek from the Remote Humanitarian Community Care (Kopkedat) of Papua asked the government not only to see the big problems that occurred in Papua such as the outbreak, but also the small problems.

“The smallest thing must be considered before it becomes a big problem,” he told Jubi in Jayapura, Wednesday (December 17).

According to Yan, what happens today is not only KLB in Asmat, but also in some areas in Papua such as Korowai which is also in the administrative area of ​​Asmat Regency.

“I take the example as in Baigon, Mabul, Amakot, Ayak and surrounding areas, many people are experiencing the same thing, but the case does not explode so that the various diseases were not known to many people,” he said.

When attention was drawn to health issues in Asmat District, it was reported that in Okbab District, Pegunungan Bintang District, malnutrition cases also occurred causing 23 infants to die in Kampung Pedam.

Reports received by the Papua Health Office are the under-five mortality occurring from December 6, 2017 to January 11, 2018. (*)

Papuans’ Mindset Need To Be Changed