Dainius Puras to Indonesia govt: Ambitious goals can be reached only if challenges are addressed 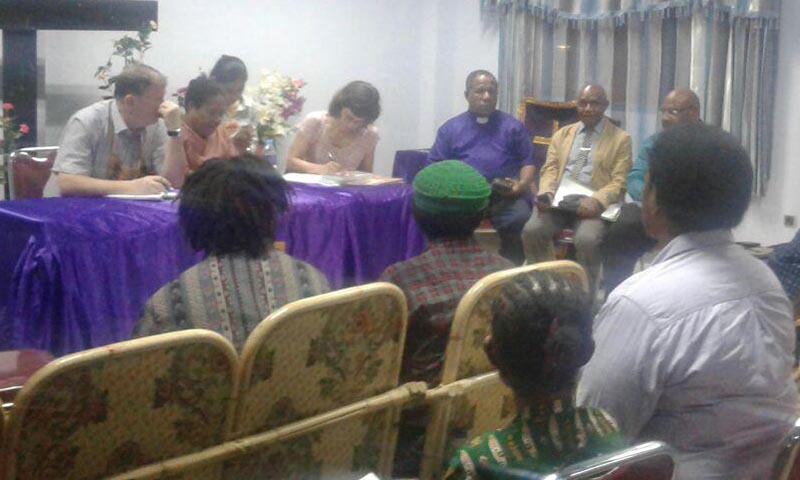 UN Special Rapporteur on health, Dainius Puras when having a meeting with civil society in Jayapura, Friday (31/3/2017) - Jubi/Benny Mawel

A statement by Dainius Pūras, UN Special Rapporteur on the right to health, on his visit to Indonesia

Jakarta, Jubi – Indonesia is on the right track to develop an equitable and sustainable healthcare system based on universal health coverage, said the United Nations Special Rapporteur on the right to health, Dainius Pūras, at the end of his first official visit to the country, Tuesday (4/4/2017).

But he felt concerned on HIV/AIDS prevalence among ethnic Papuans.

Indonesia has a relatively low prevalence of HIV/AIDS but new infections are in the rise amongst certain key affected populations who still face stigma and discrimination, including in healthcare settings.

“I am concerned about the health status of ethnic Papuans, who are two times more likely to have HIV/AIDS than the rest of the population, and new infections are in the rise,” he noted calling for special attention and efforts from all stakeholders to build trust amongst service providers and users, and enhance access to treatment and services in a culturally-sensitive manner.

He also warned, “Ambitious goals can be reached only if challenges are addressed.”

“Despite commendable efforts, availability, access to and quality of health services remains a challenge in a country where population is spread throughout thousands of islands and remote areas,” he said urging the Indonesian authorities to address such challenges “with the highest level of political commitment so that health system guarantees all core elements of the right to health.”

“There are real opportunities and genuine commitment to achieve the progressive realization of right to health in Indonesia, but public authorities need to step up efforts to address structural and systemic issues, both in law and practice, to make sure that they are not tempted by the ‘lower hanging fruit’ and none is left behind,” the expert said.

Mr. Pūras stressed that “from poor and near-poor to middle-class and wealthy users of services, public and private providers, and civil society, health professionals, and all levels of public authorities, they all need to gain and generate trust in the universal health insurance system, which is based on the principle of solidarity.”

The UN Special Rapporteur, who visited Indonesia from 22 March to 3 April 2017, called on the Government to increase national budget allocations for health. “However,” he said, “increased investments in healthcare only make sense if the system is efficient, transparent, accountable, and responsive to those who use it.”

The expert pointed out that important barriers persist, in law and practice, for the realization of sexual and reproductive health rights, consequently women and other key populations are exposed to different forms of violence and discrimination.

“I was discouraged to hear that planning and delivery of these services and sexuality education is being influenced by certain groups who continue to oppose policies, instruments and mechanisms for the promotion and protection of sexual and reproductive health rights,” he said.

“Cultural and religious norms need to be taken into account in all contexts,” Mr. Pūras said. “However, when their interpretation is such that it generates discrimination on different grounds and reinforces harmful practices, such as early marriage and female genital mutilation, it seriously undermines the effective realization of the right to health and it is not acceptable.”

Mr. Pūras also noted that the approach to drug policy remains excessively punitive undermining the right to health of people who use drugs and public health efforts. “Criminalization of drug use only fuels discrimination, violence and exclusion driving people away from the health services they need and seriously undermining public health efforts,” he underscored.

“Mental health is an emerging issue but it needs additional commitment and resources to develop a system that promotes the mental health of everyone and effectively treats and prevents common mental health conditions at the community level and respects the rights of persons with psycho-social and intellectual disabilities, the expert explained.

The Special Rapporteur will present a comprehensive report on his visit to Indonesia to the UN Human Rights Council in June 2018.(*)

TEACHERS WORK ONLY FOR TWO MONTHS

Local Teaching Graduates in Papua Must Be Given A Priority

Some Elementary and High School Students in Biak Cannot Read