This report includes analysis of the context of violence in Intan Jaya regency, in particular between Indonesian Military (TNI) and the West Papua Liberation Army (TPNPB), which has been happening at the expense of civilians in the regency. This is the first from the series published in jubi.co.id.

The shooting of Pastor Yeremia Zanambani was not a standalone crime because before it happened, there were a series of events from Sept. 17. Before the killing on Sept. 19, the local military officers summoned several Hitadipa residents at 9 am and 12 pm local time, once at the Hitadipa Preparatory Military Command (Koramil) headquarters and at the yard of Imanuel Hitadipa Church. At both meetings, the deputy commander, Alpius Hasim Madi, told the residents about “enemies”, mentioning five names including Pastor Yeremia’s name.

In the meetings Alpius said the residents had to return rifles belonging to the TNI and according to witnesses, he used threats and intimidations. Scared, several residents cried at the meetings. An hour later, the TPNPB attacked the Hitadipa Preparatory Koramil, in which First Pvt. Dwi Akbar Utomo was killed. At the same time, an official house of a Health Agency officer in Taundugu was set on fire by TNI officers. Later, the shooting and the stabbing of Pastor Yeremia happened.

Yeremia was not the first victim, in fact he was the 10th civilian victim since October 2019. He was one in a series of violent events in Intan Jaya. The armed conflict in Intan Jaya was the newest episode from violent ones that had happened since Intan Jaya became a regency in 2008.

The shift to TNI-TPNPB battleground

From 2014 to 2016, Intan Jaya Regency saw violent cases done by security apparatus to civilians. The team recorded a violent case involving a Mobile Brigade (Brimob) member, causing at least one civilian died and at least 21 injured. There was another case involving a security apparatus member which caused the death of one civilian. The characteristic of the two cases was not political. The cases were an incident, tinged by personal motive.

In 2017 to 2018, the local election for the regent provoked some violent cases. The period saw altercations between supporters of candidate pair Yulius Yapugau and Yunus Kalabetme and the incumbent Natalis Tabuni and his running mate Robert Kobogoyauw. At least three residents died and 101 were injured. Papua Police decided to deploy more personnel to the regency following the conflicts. 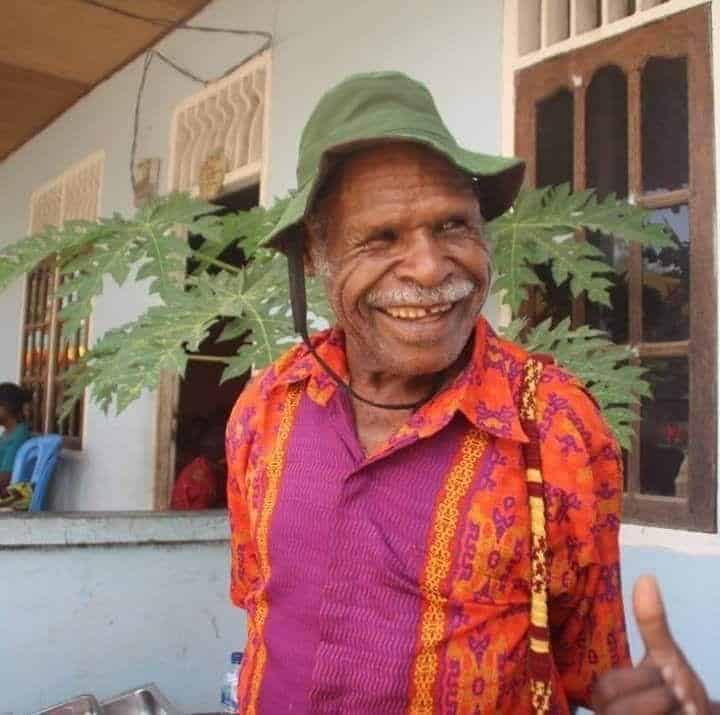 Since October 2019, a significant change happened. Intan Jaya had become a battleground between TNI and TPNPB. One violent case after another occurred and they escalated since a shooting of an Army officer on Dec. 17, 2019. Since that date to Nov. 6, 2020, there had been 17 cases involving either TNI or TPNPB. The death toll from the cases were 17, in which 12 were civilians including a child.

Intan Jaya had never been a battleground between TNI and TPNPB before. Violent conflicts happened in the past mostly were related to land ownership, horizontal conflicts between the people and common petty crimes. When conflict between tribes happened, the people would resort to traditional conflict resolution to settle them.

The shift began with Intan Jaya split from Paniai regency to become its own regency in 2008. The change had given way to conflicts between political elites that culminated in regional elections and the conflicts had rendered the regional administrations ineffective. The election-related conflicts that brought more security personnel to the tiny town of 49,293 people had made the police and the military a conspicuous presence there.

Read also: The family asked to be accompanied by The National Commission on Human Rights for Pastor Yeremias Zanambani’s autopsy

At the same time, TPNPB had consolidated their structure, widening their territory and the opening of their military commands, called Kodap. Following the High-Level Conference of TPNPB in Biak Numfor from May 1-5, 2012, TPNPB had 33 Kodap across Papua Land. Intan Jaya was marked Kodap VIII. In August 2019, the military factions of free West Papua movement declared “reunification” in Puncak Regency that also gave TPNPB more strength. Since then, armed conflicts between TNI and TPNPB escalated in Intan Jaya.

Humanity Team recorded that since Intan Jaya had become a battleground between the two armed groups, people died, but mostly they were civilians, both indigenous or non-indigenous Papuans (OAP).

The second important issue Humanity Team noted during its investigation was the information blackout on TNI personnel deployment in Intan Jaya especially after TNI had a change in the  organization structure in 2019, which included the establishment of United Command of Area and Defense or Kogabwilhan in three large territories. Kogabwilhan is led by a military general and Papua and West Papua provinces were grouped under Kogabwilhan III, based in Biak. Humanity Team faced difficulty in getting a clear information about the job descriptions of each units: Cenderawasih Military Command, local military command, and Kogabwilhan III.

Humanity Team also could not get clear information pertaining to the number of personnel and their placement in Intan Jaya.

We documented that the presence of the preparatory military command in Hitadipa was violating human rights because it occupied an elementary school, SD YPPGI Hitadipa. Team deemed the use of a school as a military command headquarters as an occupation that took away the children’s rights to studying.

Third salient characteristic we found was the absence of justice and reparation after violent cases since October 2019. We found alleged extrajudicial killing but the alleged perpetrator did not undergo any investigation nor any legal process. As of Nov. 12, 2020, only one case was investigated, which was the arson of a health worker house in Taundugu. The Army Military Police announced eight suspects in the alleged arson.

The impunity of the alleged extra judicial killings had deprived Intan Jaya residents of justice and reparation from the human rights violations there. The Declaration of Basic Principles of Justice for Victims of Crime and Abuse of Power defined victims as “persons who, individually or collectively, have suffered harm, including physical or mental injury, emotional suffering, economic loss or substantial impairment of their fundamental rights, through acts or omissions that are in violation of criminal laws operative within Member States, including those laws proscribing criminal abuse of power.”

According to that declaration, residents of Hitadipa district and Intan Jaya in general who experienced violence firsthand and structurally caused by the armed conflicts between the TNI and TPNPB were victims who had rights to a sense of security. The state has a mandate to give Intan Jaya residents justice and reparation.

Fourth salient note is the conflicts had forced people to flee from their homes. According to the data collected by Kemah Injil Church in Indonesia (GKII), Catholic churches under Timika Diocese and Intan Jaya administration, there were 466 people who fled their homes following the escalating conflicts. They were spread in several other regencies like Nabire, Mimika, and Puncak. 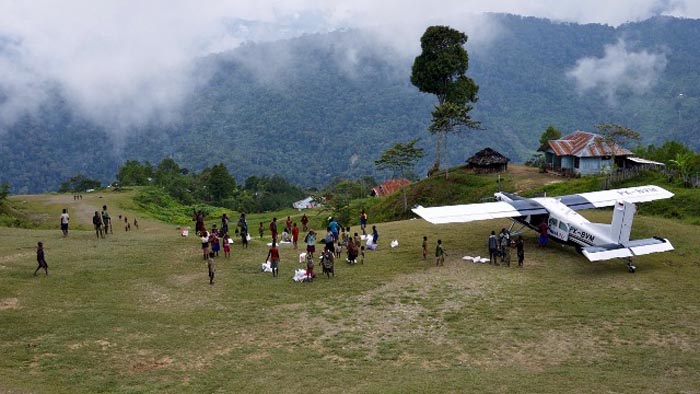 Humanity Team estimated the number could surpass this, considering difficulties in data collection. Traumatic experiences among the residents also made them reluctant to give information to authorities. Meanwhile, military patrols in Sugapa and Hitadipa districts hampered religious figures from collecting data thoroughly.

The pattern of fleeing home for safety was similar to what happened to people in Nduga regency, where some residents took shelter away from housing and government centers to avoid the police and TNI and lived in the forests. The obstacles in the data collection of the displaced people deprived these people from basic necessities like food, adequate shelters, sanitation, education, and health. Especially vulnerable among these people were women, children, and the elderly.

Fifth point is the estimated existence of gold reserve in “Blok Wabu” that had a potential to trigger a resource war. Past findings had shown causality relations between natural resources exploitation, armed conflicts, and violence escalation.

Researches from scholars including those from Indonesian Institute of Sciences (LIPI) showed that the unfair management of Papua’s natural resources had triggered conflicts in the region. The exploitative development had marginalized the local communities and this could happen in Intan Jaya too, sparking concerns of a future rife with conflicts there.

When people’s grievances against inequality in the wealth distribution from the natural resources was coupled with other triggers, particular actors could enter and utilize the grievances to justify a string of violence. As explained in a 2017 book by Ichsan Malik on conflict resolution, when natural resources were exploited, manipulative competitions between conflicting groups would arise.

Read also: Papua Customary Council: Intan Jaya was in chaos after the deployment of Indonesian Army

The plan to develop Wabu Blok for gold mining amid armed conflicts between TNI and TPNPB would only pave the way for more complicated conflicts. TPNPB had rejected mining in Blok Wabu and had demanded Papua Governor Lukas Enembe to revoke his recommendation to allow a company to open mining business there that was issued on July 24, 2020.

Humanity Team findings had shown a risk of widening conflicts in Intan Jaya. Security approach chosen by the central government was dangerous, because the security personnel had yet to show any intention to change their violent approach to the people. The latest show of impunity and attempt to blur information surrounding the shooting of Yeremia had made a strong indication of continued impunity.

The shooting of Pastor Yeremia Zanambani was an extra judicial killing, it was a violation to human rights, international law and the Constitution. Yeremia’s case apparently was not the last, because two shootings followed. Both victims were religious teachers under Timika Diocese.

Yeremia’s widow, Miriam Zoani, told Humanity Team that Yeremia’s family wanted security personnel to leave Hitadipa so she could see her husband’s grave for the first time. Miriam also wanted her neighbors to return to their homes so they could pray together for Yeremia.

The requests seemed simple for many people. But the presence of TNI officers in the area had made such simple requests almost impossible for Yeremia’s family. (*)