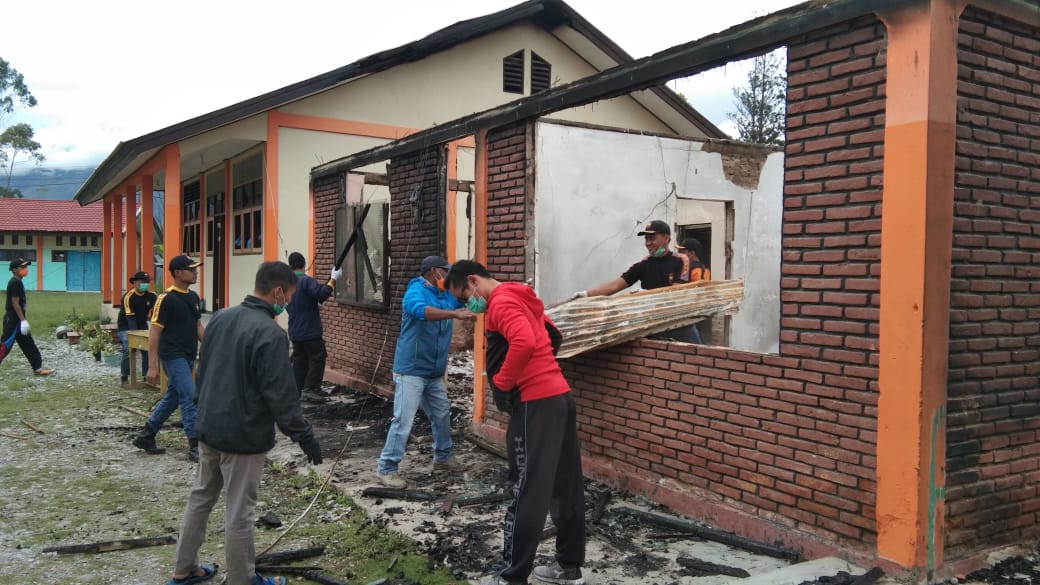 Wamena, Jubi – Following the unrest on 23 November 2019, most schools closed down their activities. Schools activities just resume on Monday, 7 October 2019 despite less attendance of teachers and students.

“At the first day of school, we focus more on recovering trauma among teachers and students, no learning activities yet,” he said on Monday (7/10) in Wamena.

The Jayawijaya Education Office remarks there are 25 of 61 schools of a range of degrees from pre to high schools reported the impact of riots toward their schools.

“The twenty-five schools already filed report on schools’ damages. Their reports have been forwarded to the regent via the Public Works Office (PUPR). They hope the government can immediately respond it for repairs,” said Bambang.

Now, in the sixth day after the riots, people can see many schools were damaged in different scales, from broken windows’ glasses to broken classrooms. In order to motivate teachers and students back to school, the regional education office calls Wahana Visi Indonesia (WVI) to assist them providing a trauma healing consultation.

“The Education Office also get an assistance from WVI to provide a trauma healing consultation for students and teachers for two weeks,” he said.

Meanwhile, the SMA Negeri 1 Wamena Principal Yosep Wibisono said after the incident both parents and students mostly decided leaving Wamena for a while. “So I am taking an initiative to clean our school with the help of the rest of teachers and students left. This is for reducing the unrest feeling when learning activities resume to normal.

There is no major damages occurred in SMA Negeri 1 Wamena. Only some windows’ glasses in the classroom, staff office hit by stones and broken as well as the school’s signpost and fence.

Separately, Efaim Yeuruan, the principal of SD YPPK Santo Yakobus Hone Lama, said the school has opened but only seven teachers and two of 490 pupils coming to school. “I have heard that students who are today absents because their parents are taking them to their hometowns after the riots,” he said.

Meanwhile, on the last 4 October 2019, the officials of the Jayawijaya Regional Government together with locals and police and military cleaned some debris from any exposed schools from Wouma to the areas of Wamena City including Hom-Hom.

Many locals and other community’s members participated to clean debris at SMP YPPK Santo Thomas. A classroom which burned down in the incident need more attention in addition cleaning the broken glasses.

The Jayawijaya Regent Richard Banua expresses his appreciation to teachers and students attending the first day of school though it’s only a few.

“I hope these pupils can motivate others who might be now in a refuge. They can see that our schools start to operate,” said Banua.

He also hopes some absent teachers can resume teaching. To students and their parents, he said the government want everyone not feeling worried because it is now safe.

“Do not worry about the spreading rumours. But if you notice that schools are now open, let us sending our children to school as usual,” he said.

He also asks the security forces to maintain their performance in doing their job securing the situation. “I have talked to the local police chef asking him and his personnel to persistently maintain the security by doing patrol and deploying personnel at certain threat points,” he said. 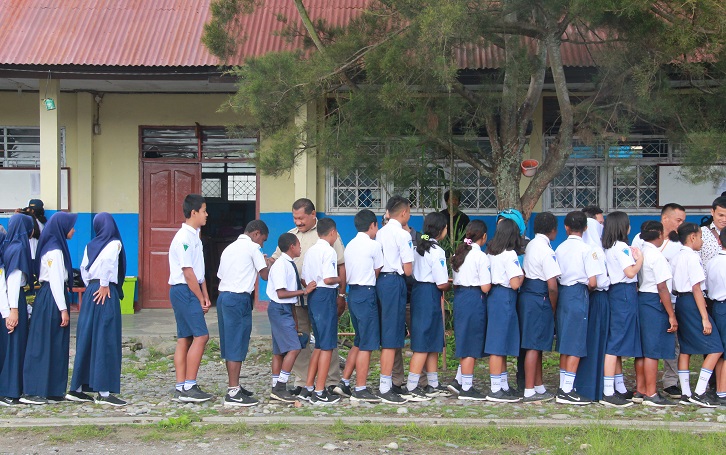 Jayawijaya Police name six other suspects to add the previous seven involving in a protest led to unrest in Wamena on 23 September 2019. Papua Police spokesperson Senior Commissionaire Ahmad Mustofa Kamal said the total number of suspects are currently 13. Ten of them are in the detention of Jayawijaya Police while three are still on the wanted list.

“YA, B and MA are still in the wanted list. There are students among the suspects. It assumes that they were only joining when destruction and burning had happened, while those in the wanted list allegedly provoked,” said Kamal in the press conference on Monday (7/10).

Moreover, he said these suspects are charged with Article 187 of the criminal code on combustion, Article 170 on destruction on people or goods collectively in public, and Article 160 on incitation to people to conduct crime.

“The police has kept the evidences related to the riots in Wamena, namely 34 stones allegedly used for destruction, 22 motorbikes and a car burned in the riots as well as a video footage of the incident,” he said.

Furthermore, Kamal said the number of suspects might be increased because the police are still continuing their investigation.

Meanwhile, the new appointed chief of Papua Police, the Inspector General Police Paulus Waterpau said there are two troops of Mobile Brigade deployed to help securing Wamena and now Papua Police plans to add another troop of Mobile Brigade to help the settled police and military troops in Wamena.

“I think the number of local troops in Wamena is enough. But we might add some more. This is also relevant to some other areas. Well, nothing, it’s just to look after and give understanding to the community,” said Waterpauw. (*)