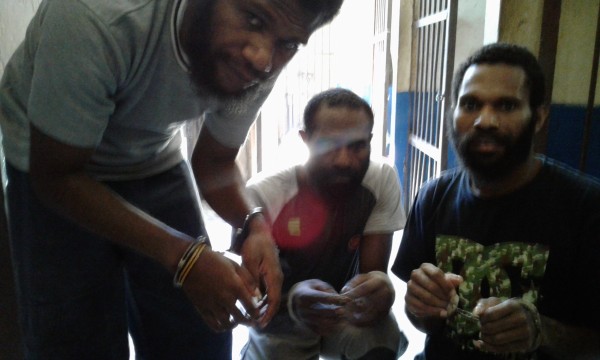 Jayapura, Jubi – A team of Papua human rights lawyers has expressed their concerns regarding the detention conditions of three defendants, who are currently undergoing trial at the Nabire District Court of Papua Province.

The three Papuan were detained in Nabire Sector Police station are in alarming condition. The public prosecutor in charge and the police officers at the Papuan Regional Police station in Jayapura and the Nabire district police station did not allow the defendant’s family to visit more than once a week.

They also get no proper health care and religious services, and permanently handcuffed during detention. The handcuffs were only opened when the defendants had to go to toilet.

The three detainees are Aloysius Kayame, Jemmy Magay Yogi and Demianus Magay Yogi who has been transferred from Jayapura to Nabire on 5th February 2017.

According to the International Coalition for West Papua’s note, the Papuan regional police linked the charges to an incident in Wotay, Distrik Yatamo, Kabupaten Paniai  on 31st January 2015. The police justified the arrests due to a conflict on customary land which had occurred after Jemmy, Demianus and Aloisius had claimed compensation for the utilization of their ancestral land for a public road.

Gustaf Kawer, the lawyer of the defendants said that their condition has been reported to the attorney and judges panel who presided at the trial. “But it has not getting any proper response until now,” he said.

Representatives of National Human Rights Commission (Komnas HAM) Papua promised to pay visit and to look closely the condition of the three defendants in Nabire.

“We will go to visit them in Nabire tomorrow, we want to see their physical or medical condition in Nabire station police,” said Chairman of Komnas HAM Papua Representative, Frits Ramandey to Jubi on Friday (31/03/2017).

Frits claimed to have heard conditions of the three defendants. “Yes we have heard they are handcuffed. We will give further response after we pay them visit,” said Ramandey.

The chairman of Regional Indigenous Council (DAD) of Paniai, John NR. Gobay asked Nabire Papua Police Chief and Regional Police Chief of Papua Province to respect the defendant’s human rights. “We ask with respect to the Police Chief of Nabire to open access to lawyers and family to be able to see them,” he said. (*)

Violence Is Not the Way to Keep Papua within Indonesia