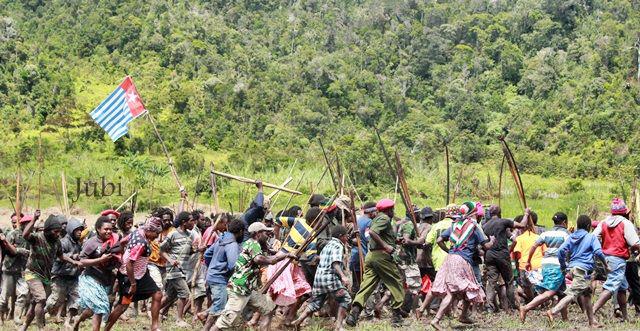 Jayapura, Jubi – In responding to a discourse and issue surround the West Papuan commemoration day of 1 December 1961 which celebrated on Sunday (1/12/2019), the Director of the Institute for Human Rights and Advocacy (Elsaham), the Rev. Matheus Adadikam, said Papuan people will conduct a peaceful activity through worships and long march.

Concerning those activities, he said the State guarantees the freedom of expression, assembly, association and religion, which stipulated in Article 28E Verse 2 and 3 of the Indonesian 1945 Constitution, National Law No. 9 of 1998 about Freedom of Expression in public, as well as the ICCPR Convention that ratified by Indonesia in 2006. Further, Article 28E Verse 1 also guarantee the citizens to do worships according to their religion. Therefore, he asks the Indonesian Military and Police to respect it.

“We ask the security forces to not be overreactive against people who express their gratitude on that day. They must respect laws and constitution on handling the groups of mass,” he said in his official written statement received by Jubi on Saturday (30/11/2019).

In the meantime, one Lapago customary leader Agus Rawa Kogoya said in a statement received by Jubi that he appeals Papuans for not doing orations on the streets.

Also, he asked all parties to not declaring any statement that potentially escalates the conflict. People should give something that soothes the public.

“Once we have said that Papua is the land of peace. Moreover, 1 December is the day when we the Christians start our preparation for Christmas,” he said.

Therefore, he suggests the people do worships in their houses, instead of gathering on the streets.

“Do not create something that can ruin the security, which possibly causes casualties. As one Lapago traditional leader, I appeal the public as well as indigenous territories to maintain the stability, in particular on 1 December,” he said.

Kogoya further admitted that he has coordination with both military and police concerning their tasks to provide security to the public.

“But, maintaining the security is not only the tasks of the security forces but also mutual responsibilities of the community leaders, youths and communities to keep Papua secured and peaceful,” he said.

“Therefore, to our brothers, the TPN/OPM, please halt your fire on 1 December. Let us do our worships together at our respective territories. Once again, I emphasise that please do not provoke situations that cause casualties. What has happened in the past is enough,” he firmly said. (*)