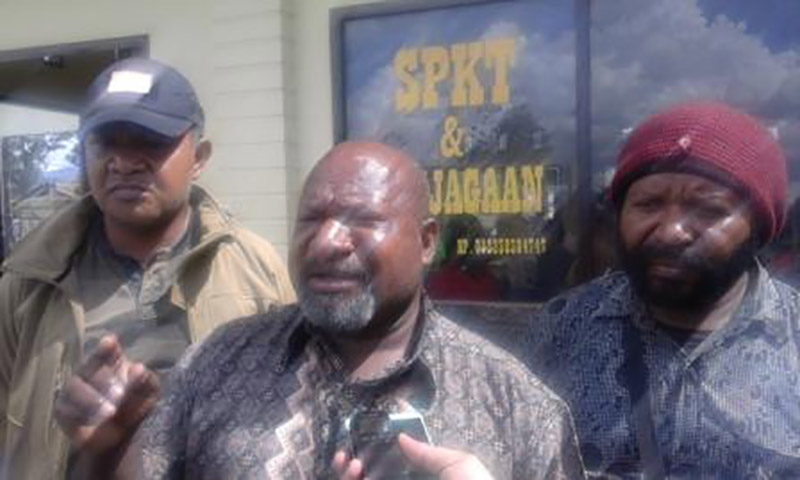 Gwijangge also said the children did not die at nearly the same time and that the Nduga Health Office chief who first revealed the deaths had not been in the area. Gwijangge said he and Jawijaya Police chief visited Mbua to see for themselves the situation on Wednesday (25/11).

“I always monitor through SSB, never heard about the report on the deaths. I have just heard this problem yesterday; even I’ve heard it from the Indonesian Police headquarters instead of my local staffers,” Gwijangge told in the interview held at Jayawijaya Police Headquarters when preparing to go to Mbua Sub-district.

He said he called the local health team and sought clarification about the matter. “I was told fewer than 40 people died. Toddlers indeed died, but the number is about 29,” he said.

Nduga Health Office said 32 children had died in the area within one month, but the regent said the initial number had not been verified.

“The report should be done after monitoring to the field. As the one who’s appointed, the Health Office Chief must go to the ground before disseminating this information. Related to this fact, I could tell he hasn’t come to the scene yet. They are currently attending the provincial working meeting, then the issue merely arose in the province, then grew and shocked us,” he said.

Related to the cause of death, the health team, according to the regent, also came to the scene and took several blood samples but the results came back negative. Thus, he suggested examining whether the local people have violated local customs.

“That’s why I suggested in addition to tackling this case through the health care system, we seek a solution through the custom point of view whether violations have happened leading to the death,” said the regent.

He also said there is a time span between each death occasion.

“It wasn’t two or three children died once in the time, there’s a time span. One died in this week, then another in the next week, and so on,” he explained.

Regarding to lack of definitive information about the number of victims, the regent expected the external parties do not urge the local government, since the local government is planning to run a field visit. Meanwhile the health care team of P2PL, Amat Lokbere confirmed about the toddlers’ death occurred at Mbua Sub-district, Nduga Regency. It started to happen since 20 October 2015.

“The toddlers’ death in Mbua is true. The initial symptom was occurred on 13 October when there was a sudden dead chicken, then continue to the pigs. And the toddlers followed to die on 20 October 2015. It was occurred in two days in one place or one was dead in one church. We have sought the cause. The symptoms are including fever, high heat temperature, turn cold briefly and then died,” Lokbere said.

He added at that time the Barefoot Task Force team from province and Puskesmas staffs came to the field and conducted examination but the result was negative.

“We took the test result to Wamena laboratory. Both field examination and laboratory test were negative. The temporary cause of death is currently determined as the acute infectious respiratory,” said Amat Lokbere.

“Based on our data in Mbua Sub-district, there are 29 cases of children and 3 adults, so the total is 32,” said Lokbere.

To check the information related to the death occurred in Mbua Sub-district, Nduga Regional Government along with Jayawijaya Police go to the field on Wednesday (25/11/2015).

“Concerning to this case, I will lead a team to the scene today, along with regional health care team. We will report our investigation to all stakeholders, especially to Papua Police as the coordinator,” said Jayawijaya Police Shemi Ronny Thaba.

Nduga Health Office Chief Mesak Kogoya who’s earlier told the information about the case of toddlers’ death in Mbua, until 21:00 Papua time, Jubi could not contact him for confirmation on the regent’s accusing. (Wesai H/rom)

Hemodialysis Room Must Be Completed This Year

The Ecumenical Working Forum of Papuan Churches: “We have no future in Indonesian system”