Children in Nduga threated not have access to the Polio vaccine 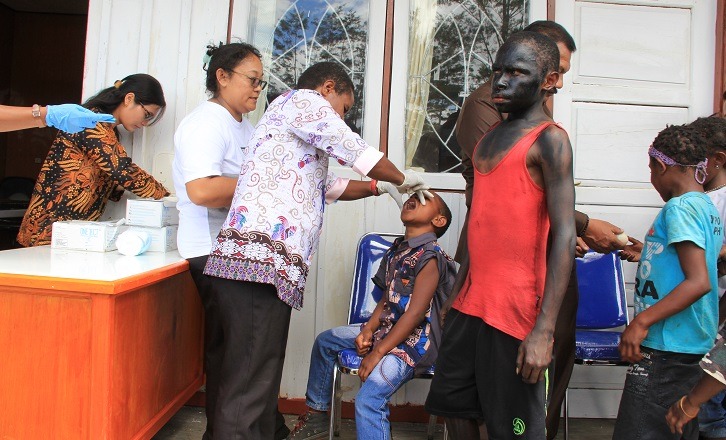 Illustration of vaccination held in the central highlands of Papua. – Jubi/Islami

Nduga, Jubi – The proportion of the implementation of PIN (National Immunisation Program) for Polio in Nduga Regency is the lowest in the entire of Papua Province. The recent conflict in Nduga might worriedly cause many children to obtain the polio vaccine. Until 13 June 2019, the Provincial Health Office recorded that the proportion of polio vaccination in this regency is still 0,18 per cent.

Togu Sihombing from the Provincial Health Office of Papua said the absence of health workers following the conflict occurred in recent months in Nduga Regency has become the main problem of this issue. “Immunisation and health office staffs in Nduga Regency are not there. So, the vaccination program did not work,” he said in Jayapura on Thursday, 13 June 2019.

To address this issue, he said the Health Office of Papua Province has communicated with the Head of Nduga Health Office to conduct the immunisation program and ask the Regent to guarantee the safety of health workers in the field during the implementation of the program.

Moreover, Sihombing explains that children under 0-15 years old from Nduga Regency who fled to Wamena and Lanny Jaya have obtained Polio vaccine. They represent 0.18 % of program achievement, whereas those who live in Nduga Regency have not yet got the Polio Vaccine.

“Health workers from the Provincial Health Office want to come to Nduga, but it is not possible now because of the security reason,” he said.

Concerning the current situation in Nduga, TPKP Rimba Papua sent an open letter to UNICEF, Health Office and other relevant stakeholders to concern about it. In its letter, TKP Rimba Papua said that women and children in the military conflict area of Nduga Regency experience a crisis of health. “The most critical case occurred in some districts of Drakma, Dal, Mobil Yalma, Gigi, Inigyal and surrounding areas,” wrote this organisation on 14 June 2019.

Moreover, the organisation asked the Health Office to take action and urged the UNICEF to not being fearful of the security and safety to work on the ground because it has a safety guard guarantee from the United Nations.

Meanwhile, the Head of Nduga Health Office, Ina Gwijangge, explains that they have not implemented the immunisation program because of the bad weather and flight schedule. “We have contacted a provider to rent a chopper for conducting the health services, but we cannot execute it due to the bad weather. It has been raining for weeks recently, so we cannot do the service,” she told Jubi via short message service on Tuesday, 18 June 2019.

Also, she admitted that the health officials face difficulty to reach many residents who fled in the forest and other neighbouring regencies. Related to the lowest proportion of polio vaccination in this regency, she said she has communicated with the Provincial Health Office of Papua and asked PT Freeport Indonesia to provide helicopter.

“However, the company sent a letter refusing our request. They said it relates to the weather in the rainy season. Air mobilisation is not possible to conduct,” she said. (*)