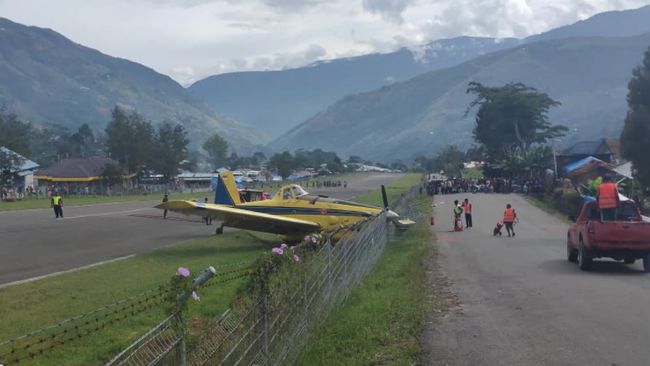 The police have opened road access to the Yalimo Airport after being blocked by supporters of regent candidate Erdi Dabi, who are dissatisfied with the Constitutional Court's decision to bar Dabi from running in the election. Courtesy of the Papua Police.

Jayapura, Jubi – The supporters of the regent candidate of Yalimo, Erdi Dabi, has allegedly burned a number of buildings in Elelim, the capital town of Yalimo, on Tuesday, 29 June, 2021, as well as blocking access to the Yalimo Airport on Wednesday.

The chaos erupted following the Constitutional Court’s decision to disqualify Dabi from running in the regional election as he did not meet the requirements. The Court has told the General Election Commission (KPU) to allow Dabi’s running mate, deputy regent candidate John Wilil, to find a new regent candidate. The Court also demanded the KPU to hold re-election for Yalimo’s regent and deputy regent.

Papua Police spokesperson Sr. Comr. Ahmad Musthofa Kamal said that the police had reopened the access to the Yalimo Airport on Thursday. “Yes, it was [blocked]. But now it’s all clear,” Kamal said, as quoted by CNN Indonesia.

Kamal said his party had coordinated with religious and community leaders to calm the masses who were dissatisfied with the Constitutional Court’s decision.

“We are trying to prevent further destruction [of public facility]. Therefore, we need an immediate synergy between the security forces and religious and community leaders,” he said, adding that the Papua Police had deployed two teams of the mobile brigades to secure Yalimo.

More than 1,600 Ballots for Elections in Papua Damaged