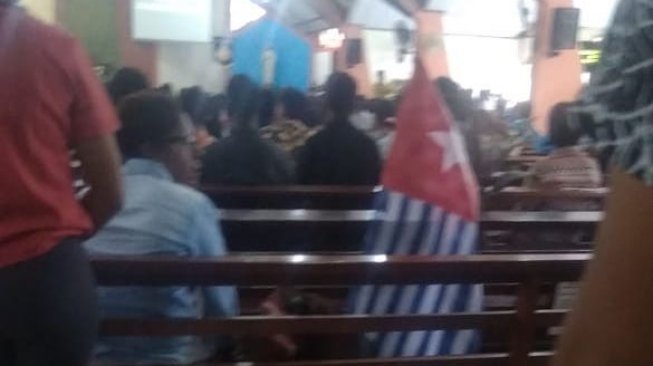 Jayapura, Jubi – Four students were taken to Abepura Police station while attending Mass at Gembala Baik Catholic Church, Abepura on Sunday (1/12/2019). Wearing the traditional clothes of Papuan highlands, two of them decorated their faces with the pattern of Morning Star.

The four students are Marvin Yobe, Desepianus Dumupa, Paul Halapok and Devion Tekege. “They brought three Morning Star flags,” said Mario, an Abepura resident who was at the worship.

A police officer who not wear uniform at that time stood to arrest the students when they were about to receive the Host, but hold by the congregation asking him to respect the Holly Communion. Then, the police officer took the students out of the Church after seizing their flags.

Among the four, Desepianus Dumupa (26 years old) said their aim bringing the Morning Flags to the Church was to ask God for freedom. “Our purpose coming to the worship with the flags is to ask for help from God. We ask God to give freedom for Papuans,” said Dumupa.

At the meantime, the Director of Legal Aid Institute (LBH) Papua, Emanuel Gobay, said the police took the students to Abepura police station for questioning. During the investigation, Jayapura Police Chief Gustaf Urbunas came and met with the Coalition Team of Papua Legal and Human Rights Advocates who accompanied the four students.

Urbinas stated the four students would be taken to Perumnas III Waena to inspect their accommodation after the examination for searching other evidence. After that, they would go to Jayapura Police Headquarter for further investigation.

“When asked about the legal status of the four students, the police chief said the police still ask their clarification before taking a decision,” said Gobay, the Coordinator of the Coalition team.

However, Gobay continued, after their inspection to Perumnas III, the police did not found any evidence. Then, the police took the four students to Jayapura Headquarters, took their pictures and fingerprints before continuing the interrogation.

The examination continued until 00.59; Monday, 2 December 2019 before the four students were finally released.

Meanwhile, as quoted by Antara News Agency, Papua Police Chief General Paulus Waterpauw confirmed the interrogation against the four students. “I ordered Jayapura Municipal Police Chief to explore the case, to find out what do their plans,” said Waterpauw.

He stated in general the security situation in Papua is conducive during the commemoration West Papuan Independence Day which held every 1 December. Moreover, he said there were no public activities considered disturbing the security and public order.

“Generally safe, conducive and controlled. We are grateful to all stakeholders. Therefore, the commemoration of 1 December, which is an annual event, can run in a conducive, safe and controlled,” said Paulus Waterpauw on Sunday (1/12/2019). (*)