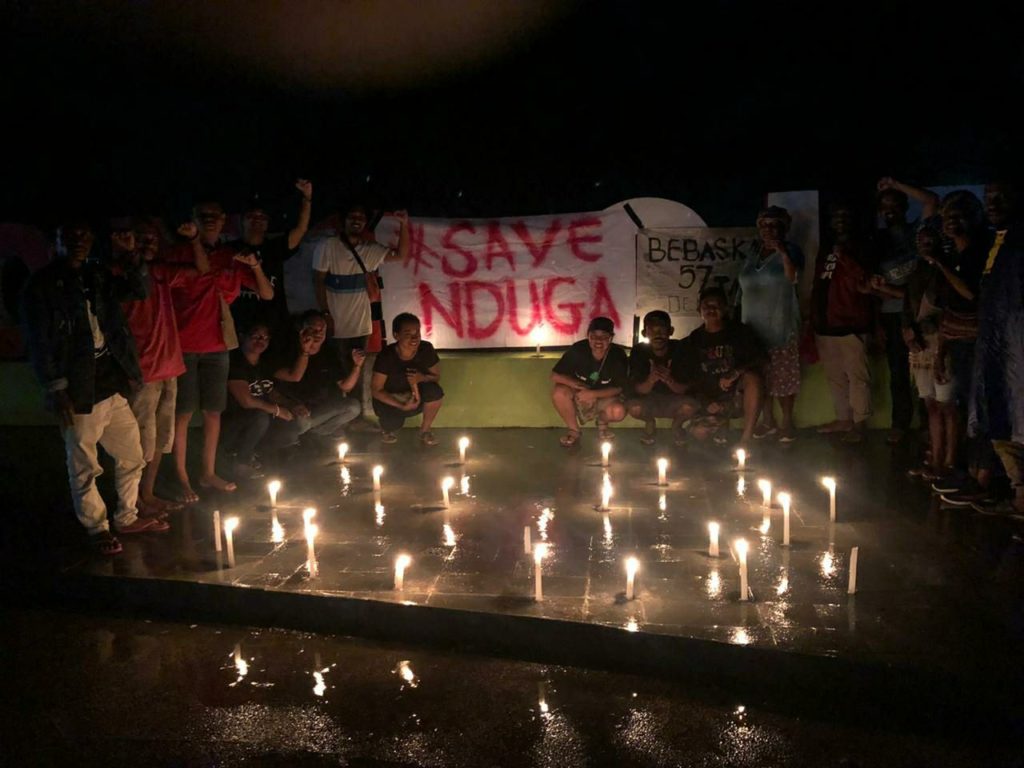 Sorong, Jubi – The rain seems not to interrupt a group of young people in Sorong City, Papua Barat, to raise banners and posters in solidarity for Nduga’s people on Friday afternoon (7/3/2020). This Friday’s candlelight solidarity event has conducted two months ago, started in January 2020.

The event coordinator Leonardo Ijie said the event is a mutual commitment of young people to the humanitarian issue and opened for everyone who concerns about justice enforcement and peacebuilding in the Land of Papua (Papua and West Papua provinces), in particular, what has happened in Nduga.

The recent data released by Papua Behind Bar records that there are 243 civilians died during the military operation in Nduga since 4 December 2018 to 2 February 2020. It includes those who killed by the Indonesian military and police and those who died of hunger and illness.

Furthermore, Ijie, who is also the Secretary of the Legal Aid Institute (LBH) Kaki Abu observes that the state has neglected the civil rights of Nduga people in various ways, one of which is security.

“Up to this day, the state or even the government is not paying attention to this issue. Now, this (humanitarian) issue starts to disappear from us, especially from indigenous Papuans,” he told Jubi on Friday night during the event.

The candlelight vigil in solidarity for Nduga will continue to hold until the people in Nduga get their rights by allowing the refugees to return to their village without feeling intimidated.

“Today, through this event, we want to tell the world and Nduga people that they are not alone. We are here for them,” said Ijie.

“We are determined to carry out this action until the situation in Nduga turns conducive. We ask the government to subject this issue as a crucial matter. That there is a massive displacement, severe human rights violations in Nduga. It seems there is no humanity out there,” said Ijie.

However, participants attending the event this Friday are less than the previous days. “Perhaps, the rain has made fewer people come,” said Ajie explaining that there was no problem arranging this event so far.

“Usually, there would be two police officers who just come to watch.”

A participant Debby says that his willingness to take part in this solidarity event began with her concern over several human rights violations and violence by state apparatus against Papuan civil society.

“I represent those of other Indonesian regions. I am Muslim and very concerned about what has recently happened in Papua,” said Debby.

In line with Ijie, Debby finds that the neglection by state and government towards the legal settlement of events that had usurped the rights of ordinary people in the Land of Papua.

”It seems the state has tolerated human rights violations in Papua, in Nduga. It made all of us in Papua feeling unsecured, particularly among the migrants who have limited information. It made us suspicious of each other. I come to the solitary for purely voicing peaceful in Papua,” he said.

The candlelight vigil in solidarity for Nduga lasted for approximately an hour. About twenty attending people then dispersed in an orderly manner while the rain is still pouring. (*)