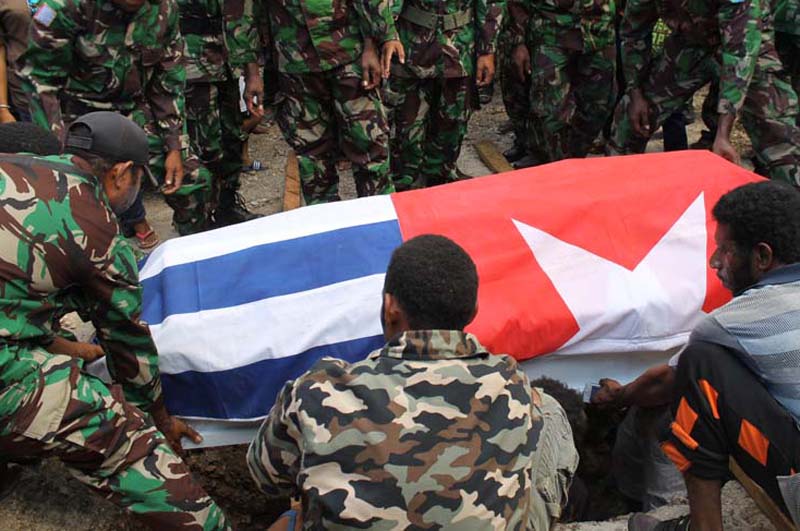 Jayapura, Jubi – The people of Papua, especially the West Papua Liberation Army (TPN) has mourned the death of a charismatic figure in Brigadier General Richard Joweni. The man whose real name was Uria Hans Joweni, passed away on 16 October at 23:00 Papua time at 72. Joweni had been taken to the Vanimo Hospital to get medical treatment for gastrointestinal problems and physical weakness related to old age, after spending half of his life or 48 years as a guerilla fighter in the jungles of Papua. His death is a great loss particularly for his three children because his wife had earlier passed away on 22 September 2014 due to illness. The late General Joweni who was the Supreme Commander of West Papua Revolutionary Liberation Army (TRP PB) Liberation Army was born on 3 December 1943 at a village located in Teluk Wondama Regency, West Papua Province. As the TRP PB Supreme Commander, he headed 9 Papua Regional Command and 10 Military Command that partially covered the Papua Highland areas. General Joweni also the Chairman of West Papua National Coalition for Liberation (WPNCL) that incorporated with the United Liberation Movement for West Papua (ULMWP) to fight for West Papua through diplomacy at the MSG (Melanesian Spearhead Group) Forum and PIF (Pacific Islands Forum). Besides leading the guerilla, he was also known as a diplomat who lobbied a number of leaders of Melanesian countries at South Pacific to support West Papua for independence. For his services to Papua and as the Supreme Commander of West Papua Revolutionary Liberation army, he was awarded the tittle of the General of Guerilla (Posthumous) during his funeral procession at Endokisi Yokari Village, Tanah Merah, Jayapura Region. According to Jonah Wenda, the TRP PB Military Council spokesperson, in addition to be known as a persistent guerilla soldier in the jungle, Richard Joweni was also known as a charismatic figure in leading the struggle to the national liberation of West Papua nation. “He has taught ways to fight in dignity, peaceful and respect to others,” recalled Wenda. Further he said, in order to continue the leadership at TRP PB, the Colonel Amos Serondanya is appointed to temporarily replace the late General Joweni until the next determination of the Supreme Commander. The determination would be held after fourteen days of mourning that is marked by rising the Morning-Star flag at half-mash in both military and Papua regional commands under TRP PB. The funeral ceremony of the late Richard Joweni was held peacefully with the worship and military procession to honor him. The late Richard Joweni joined the West Papua Liberation Army in 1968 when he was 25 years old. Previously he had worked as a clerk in the Government of Netherlands in Papua. When the guerilla was led by Seth Rumkorem, he got several strategic positions until he was later appointed as the Supreme Commander of the West Papua National Liberation Army (TPN PB) until his death. (J. Howay/rom)