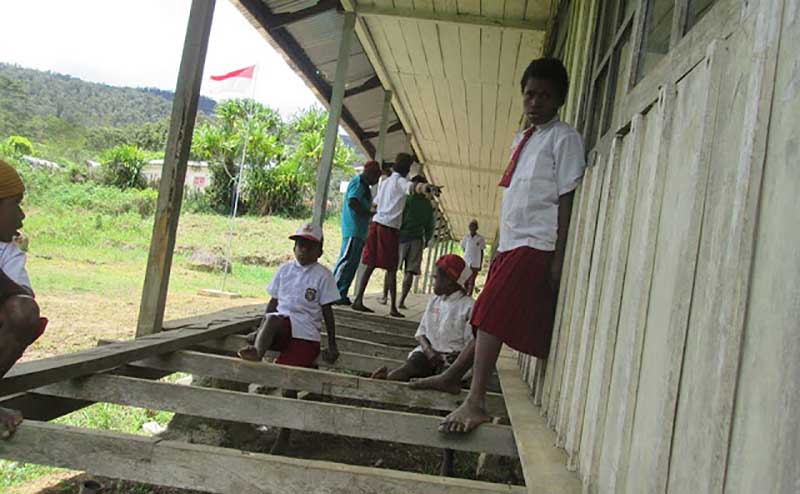 Since SDN (elementary school) Bogiyateugi at Kamuu Selatan Sub-district was built in 1998, it has never been revamped and only had three unfurnished classrooms to accommodate 98 pupils - Jubi/Agus Tebay

Since SDN (elementary school) Bogiyateugi at Kamuu Selatan Sub-district was built in 1998, it has never been revamped and only had three unfurnished classrooms to accommodate 98 pupils – Jubi/Agus Tebay

Dogiyai, Jubi – The Dogiyai Education Office urged the local government to renovate SDN (elementary school) Bogiyateugi at Kamuu Selatan Sub-district, saying that since it was built in 1998, it has never been revamped and only had three unfurnished classrooms to accommodate 98 pupils.

The principal, Eneas Anou, said the government has not paid attention to the school and its facilities are also inadequate.
“There are no ceilings, no furniture for each classroom, no doors as well. So we use a plank as the door. Also, the terrace’s floor have lost its base because the planks were already rotten,” the principal told Jubi in Moanemani on Tuesday (27/9/2016).
He said another problem is there are not enough teachers.
“Currently the school building only has three classrooms without any supporting facilities. Also, we only have five teachers, including one civil servant and four contract teachers who must teaching the 98 pupils from the 1st to 6th grades,” he said.
School Renovation and Teachers’ Housing
Anou asked the local government to immediately response to his proposal in order to improve the quality of education in the sub-district.
He said, besides of the school building, he hoped the government would provide facilities such as chairs and tables for the pupils as well as teachers’ housing to be built near the school location.
“I hope the local government, in this case Dogiyai Education Office, can visit soon to see the school’s poor condition,” said Anou. He said the local government would be touched and meet the school’s request.
“We hope the government is prioritizing our proposal and able to realize it (allocate in the budget) within this year or next year,” he said. However, the learning process is still running although it has been encountering some difficulties sometimes.
KNPI (Indonesian Youth National Committee) Chairman of Kamuu Selatan Sub-district, Dogiyai, Melianus Woge who’s sub-district native confirmed the principal’s statement when he was contacted. He said this elementary school has obtained less attention from the local government.
“During the time the local government has never looked after the development in the remote area, including the school at Kamuu Selatan sub-district,” said the man who just been elected for five months as KNPI Chairman at Kamuu Selatan. (*/rom)
facilities Pupils

Some Students at SMPN Buti Cannot Read or Write