Blocking Papua from the Truth 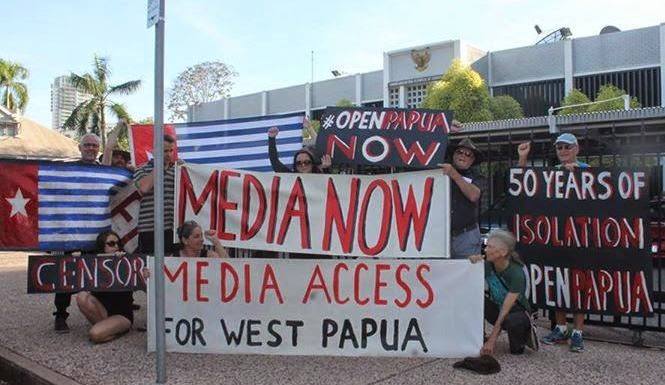 On 20 December 2016, Legal Aid Foundation for Indonesia Press (LBH Pers) was staging a press conference. It highlighted the censorship done by The Indonesia Ministry of Information and Communication (Kominfo) towards Suara Papua, a local news outlet based in Abepura, Papua. With no prior notification, Suara Papua was silently to be put together with the list of 11 websites that blocked by the government. Those websites allegedly has violated the principles of journalism, promoting hoax and hate.

Soon after the press conference, late evening that day, Rudiantara, the Minister of Information and Communication called Asep Komarudin from LBH Pers by phone. He promised if the censor will be pulled out the next day.

In 21 December, Suara Papua finally can be accessed the next day but not for those using Telkomsel, the largest telecommunications service provider in Indonesia. In Papua, Telkomsel is the main player and controls more than 65% of the market for mobile phone services users. When I published my piece in Suara Papua couple weeks ago, dozens of people told me that they could not read it because the Kominfo block.

Arnold Belau, Suara Papua’s Editof in Chief says that there were no reasons behind censorship. There was no early warning, official letter of notification or so on. He found out if their website has been put under censorship since 14 November 2016 based on the screenshots sent by the readers from different region of Papua. Belau strongly believes that access blocking and censorship is repressing the freedom of press and violated public rights to get information, in particular for Papuans.

Franky Samperante, the Executive Director of PUSAKA Foundation says that the censorship towards Suara Papua, shows how Joko Widodo (Jokowi) is once again following the footstep of his predecessor, Susilo Bambang Yudhoyono. He believes that the censorship towards Suara Papua is an act of repression against the alternative voice for raising facts, concerns and awareness regarding the ongoing human rights violation, land grabbing against indigenous people, the massive environmental destruction, education and health problems, poverty and so on, which rarely mentioned by the mainstream news outlets in Indonesia.

The statement has similar tone with the 2015 report of Human Rights Watch (HRW), “Something to Hide?: Indonesia’s Restrictions on Media Freedom and Rights Monitoring in Papua.” The 75 page report shows the government’s roles in obstructing access to the provinces of Papua and West Papua. Phelim Kine, the Asia Director of HRW says that government access restrictions have for far too long made Papua as Indonesia’s “forbidden island” for foreign media and rights monitors. Foreign journalists describe an opaque and unpredictable permit application process in which they often never received a final response. Many have waited fruitlessly for months –and in some cases years– for approval.

Some journalists who went to Papua with tourist visa will face the threat of arrest by the security forces as it experienced by Thomas Dandois and Valentine Bourrat in 2014. The pair -who were working for Franco-German TV channel Arte- was arrested by Indonesian security forces on 7 Augusts while interviewing Areki Wanimbo, a local indigenous leader. Dandois and Valentine were sentenced to 2.5 months prison and 200 USD fined and was released in 28 October 2014. But Wanimbo -who was charged with conspiracy to commit treason- has to wait for nine months before released from the prison.

Suara Papua at that time was one among few who regularly providing updates on Wanimbo when all eyes were focusing on Dandois and Bourrat only.

When Jokowi announced to open Papua and easing the access for foreign journalists and monitors body, strong resistance came from some senior government and security forces officials. The promised never been in real because Jokowi did not followed the announcement with a specific written directive, which opened space for non-compliance by state agencies and security forces opposed to loosening restrictions on foreign observer access to Papua.

Various senior officials have since publicly contradicted the president’s statement. Then the Ministry of Foreign Affairs, Luhut Binsar Panjaitan ,which has announced that the government will take serious action towards those who are trying to limit journalists access and works in Papua. However, in contrast to the statement, HRW found out that no significant changes on the ground. Andreas Harsono, the Indonesian researcher of HRW has confirmed that prior to police permission, the foreign journalist who seeking to travel to Papua is still required to provide details of their likely sources and dates of travel in advanced. Those details are believes to be used by the security forces to keep an eye upon the journalists’ works and preventing bad news goes out from Papua.

Terrifying with bad news from Papua is similar with one that imposed upon Suara Papua, as media who promoting separatism and doing black propaganda against Indonesia. On the same line, this baseless assumption of Kominfo also tarnishing the legacy of the late Oktovianus Pogau, founder of Suara Papua whose name was recently taken to name after an award for Indonesian journalist who shows bravery on reporting issues regarding human rights violation. (*)

The author is an researcher for Pusaka Foundation, Jakarta

The crackdown in West Papua continues before the pools

DPR PAPUA ASKS SWITZERLAND TO BE MEDIATOR IN PAPUA-JAKARTA DIALOGUE