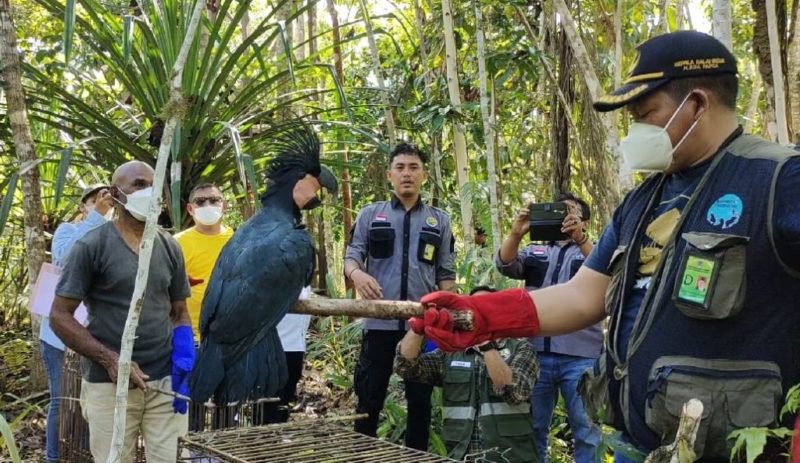 Papua BBKSDA head of Planning, Protection and Preservation Lusiana Dyah Ratnawati told Jubi in a written statement that all of the animals had been rehabilitated in the Waena campground prior to the release.

Previously on Friday, the BBKSDA received the animals from the Papua Police. A police member of the Papua Police’s specific crime department, First. Brig. Al-Idrus, said that his team found three palm cockatoos when patrolling in Yapsi District on Thursday. The birds were found in a small place covered with boards.

“We couldn’t find the owners. We immediately took care of the animals. Thank God all the animals can be released into the wild today,” he said on Sunday.

The 150-hectare area is now managed by several non-profit organizations focusing on the environment, including Isyo Hill’s Bird Watching, and supported by several state-owned enterprises.

Papua BBKSDA head Edward Sembiring said the Isyo Rhepang Muaif forest was chosen as the release location as it was a representative habitat for various types of birds, including those released on Sunday.

Sembiring added that his party had previously released eight animals to their habitat on Tuesday in the area of Pasir 6, North Jayapura District, comprising one eclectus parrot, five green pythons (Morelia viridis), and two panama lizards (Tiliqua scincoides). One green python was received from the Jakarta BBKSDA in July, while the other seven animals were confiscated at Theys Eluai Sentani Airport from November 2019 to May 2021 by the Jayapura Class I Agricultural Quarantine Center.