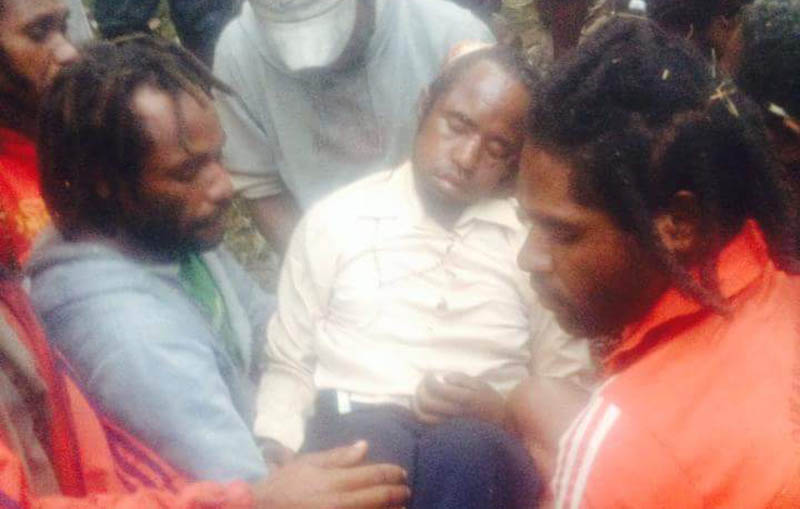 Arnold Alua body while buried by his family in Wamena - Jubi

Arnold Alua body while buried by his family in Wamena – Jubi

Arnold’s father Linus Alua explained the family didn’t know about a throwing incident that occurred at Civil Service Police Unit Office on Sunday night (24/4/2016). At that time, Alua said he, his wife and their son Arnold Alua was at home where located at Kompleks Baliem Cottage. Arnold was sleeping at the time after eating pork. Shortly he heard the sound of police and civil service police officers came to Baliem Cottage. They were chasing the location. Then Arnold’s parents fled through the rear of the house without closing the door. The joint force then entered the house and found Arnold who was sleeping.

“Then they (police) took my son to a car that was parked at the big road and beat him. Arnold was still awake when taken to the big car,” he told reporter in Wamena on Saturday (30/4/2016).

While seeing the incident from the garden behind his house, Linus thought his son was taken to the post, but later he heard his son was treated at the Emergency Room of Wamena Public Hospital. His family went to the hospital to confirm the information.

“Then we could mark the bruise on his head and neck,” said a family member Daud Alua.

At the hospital, the family asked about the victim’s medical check, but Daud Alua said the family had no explanation until tomorrow (Monday, 25/4/2016) at around 06.00 Papua time, Arnold Alua passed away. His family and the village chief came to the hospital bringing his body to the house.

Jayawijaya Police Deputy Chief Police Commissionaire Fransiskus Elosak asserted the accusation filed by the victim’s family is not make sense. According to him, the Civil Service Police Unit initiated the raid at Baliem Cottage, while the police only supported it as back up. He also explained he wasn’t with the joined force during the raid, but if there is a violence, it must be proven by the post mortem and autopsy.

“The post mortem actually would be held, but the family just took the body out of hospital and cremated the body when the autopsy would be conducted,” said Deputy Chief when being confirmed on Sunday (1/5/2016).

“The victim’s family couldn’t blame the police or civil service police unit, if they are not satisfied, they could come to the Police Office and get the explanation directly from the Police Chief,” he said. (Islami/rom)