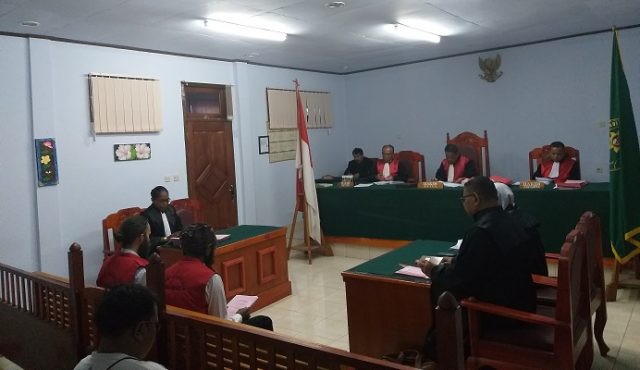 Wamena, Jubi – Legal representatives of Jakub Fabian Skrzypski and Simon Magal, Latifah Anum Siregar and Aloysius Renwarin, question the indictment of public prosecutor against their clients in a defence trial conducted in Wamena District Court on Tuesday (23/4/2019). In the prior lawsuit, the state prosecutor charged their clients with a ten-year sentence.

Simon Magai’s lawyer, Aloysius Renwarin, said based on the testimonies of all witnesses presented by the public prosecutor, there is no statement reveals Magai’s involvement in this case. Even all witnesses did not understand about his status in this trial.

“He (Simon) did not involve in the activities related to attacks and all sort of things that accused on him. Therefore, we ask the panel of judges to make a fair decision, and he will be free from the charges,” Renwarin told reporter after the trial.

The accusation that his client has violated the treason article does not make sense,” said Renwarin, because Simon did not commit a violation against the state. He only communicated with defendant Jakub Fabian Skrzypski via social media app. Therefore, there is no evidence showing the attack on the country or destroyed place due to an attack. So this not meets the criteria of treason crime.

“Ten-year sentence without strong legal fact, as well as trial facts including evidence and eight witnesses that reveals Simon’s involvement in this treason court, does not make sense,” he continued.

Meanwhile, legal attorney of Jakub Fabian Skrzypski, Latifah Anum Siregar, considered that two of ten witnesses presented in the previous hearing was able to categorise as non-valid witnesses because they were not seeing, listening or witnessing when the incident occurred, or these witnesses considered as those who heard news from someone else.

She also questions why only Jakub Fabian Skrzypski accused against the treason article because of his meeting with some people from an illegal organisation as revealed in the court by Edward Wandik.

“Before Jakub met with KNPB who accused against the country, committed a crime, the fact is many people or other organizations have met or published books or articles, made a video or youtube channel related to this group. But they are not arrested or take to the court,” said Anum Siregar.

Furthermore, said Anum, in the meeting at the KNPB Secretariat both in Jayapura and Timika, Jakub was not alone. He came with other people, but why those people not being charged with the treason article?

“From what we stated in the defence trial, the treason articles charged against my client was not proven, including Article 106, 87 and 55 paragraph (1). Therefore all charges against Jakub Fabian Skrzypski was not fulfilled and therefore was not proven legally and convincingly according to the law,” she said.

The next trial session will conduct in Wamena District Court on Thursday (04/25/2019) to schedule a hearing of the prosecutor’s disclosure to the defense trial. (*)