Amnesty International : There may be Further Arrests of Peaceful Political Activists in West Papua 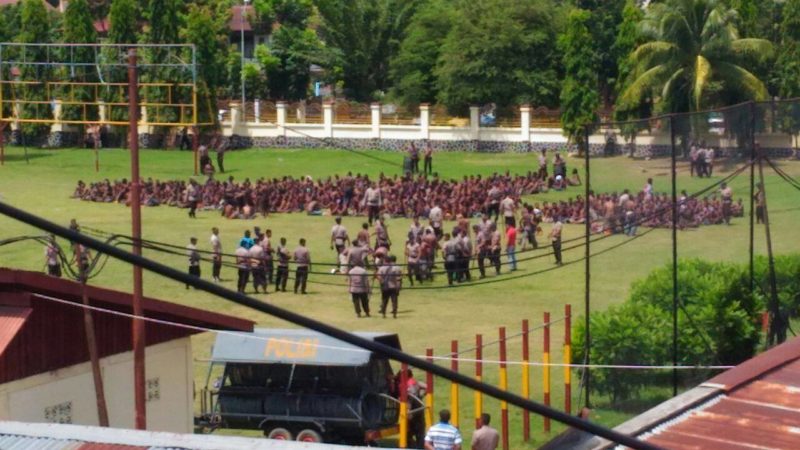 Protesters being grouped at the square in Brigade Mobile Headquarters - Jubi

Protesters being grouped at the square in Brigade Mobile Headquarters – Jubi

Jayapura, Jubi – Amnesty International deplores the mass arrests of Papuan political activists by the Indonesian police forces both in Papua region and other provinces in the country. They were arrested solely for exercising their rights to freedom of peaceful assembly and expression. Those who remain detained must be immediately and unconditionally released.

Around 1,700 Papuan activists were arrested on 2 May after they organised and participated in a series of peaceful demonstrations in Jayapura, Merauke, Fakfak, Sorong and Wamena in Papua and West Papua provinces, in Semarang, Central Java province and in Makassar, South Sulawesi province.

The demonstrations were organised by supporters of the United Liberation Movement for West Papua (ULMWP), a Papuan pro-independence umbrella group, in support of its application to gain full membership of the Melanesian Spearhead Group (MSG), a sub-Pacific intergovernmental organisation. They also commemorated the 53rd anniversary of the handover of West Papua to the Indonesian government by the United Nations Temporary Executive Authority (UNTEA) on 1 May 1963 and coincided with the 3 May International Parliamentarians for West Papua (IPWP) forum in London which discussed support for an international supervised referendum for the Papua region of Indonesia.

In the lead up to the activities, between 29 April and 1 May, the police forces in Papua and West Papua provinces arrested around 50 Papuan activists in Jayapura, Wamena and Merauke when they were distributing flyers calling on people to join the demonstrations.

On 2 May, the police forces in Semarang, Central Java province and Makassar, South Sulawesi province arrested around 45 and 42 Papuan peaceful activists respectively.

In West Papua province, the Sorong and Fakfak district police arrested at least 67 Papuan activists during a peaceful rally on 2 May.

While most of all those activists who were arrested were released without charge after one day, these arbitrary arrests highlight the ongoing repressive environment faced by political activists in the Papua region.

The widespread use of arbitrary arrest in the Papua region, apparently as a deterrent to political activism, suppressing the exercise of the rights of peaceful assembly and freedom of expression, highlights the failure of the Indonesian government to make a distinction between peaceful activists who support Papuan independence through peaceful expression of opinion, and those linked to armed pro-independence groups which pursue their aims through the use or threat of violence.

Amnesty International recognizes that the Indonesian government needs to maintain public order on its territory. However, it must ensure that any restrictions on freedom of expression and peaceful assembly are in accordance with Indonesia’s obligations under international human rights law, including the International Covenant on Civil and Political Rights to which Indonesia is a State party.

Amnesty International is concerned that there may be further arrests of peaceful political activists in the weeks preceding the upcoming MSG Summit tentatively scheduled between end of May and early June 2016, which will address ULMWP’s application to become a full member of the MSG.

The United Liberation Movement for West Papua (ULMWP) is an umbrella organization established in December 2014 and made up of different factions of the Papuan independence movement.

The Melanesian Spearhead Group (MSG) is an intergovernmental organization, founded as a political gathering in 1983, composed of the four Melanesian states of Fiji, Papua New Guinea, Solomon Islands and Vanuatu, and the Kanak and Socialist National Liberation Front (FLNKS) of New Caledonia (a French territory in the South Pacific). In June 2015, Indonesia became an MSG associate member and the MSG granted the ULMWP observer status.

The International Parliamentarians for West Papua (IPWP) is a cross-party group of politicians that supports the right to self-determination in the Papua region.  Launched in London, United Kingdom, in 2008, the group currently has 95 signatories from various countries around the world.

Amnesty International takes no position on the political status of any province of Indonesia, including calls for independence. However, Amnesty International considers that the right to freedom of expression protects the right to peacefully advocate independence or any other political solutions that do not involve incitement to discrimination, hostility or violence. (Victor Mambor)

There is no significant progress on Papua Human Right issue

Student in Ternate charged with treason over Papua protest