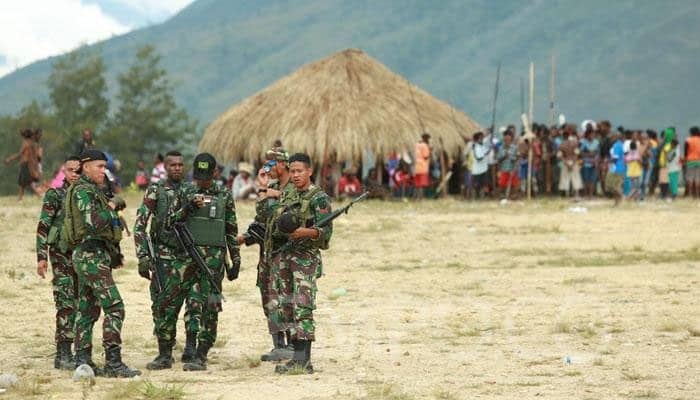 Manokwari, Jubi – Executive Director of Amnesty International Indonesia Usman Hamid was concerned about violence occurring to four Kosyefo residents by Indonesian soldiers in Kwoor Sub-district, Tambrauw Regency. He thought this act of violence had violated the Convention Against Torture.

“We regret that violence against civilians by the military in Papua is still happening. This kind of action would not only cause physical injuries to victims but is also inhumane and degrades their dignity as human beings. Such acts of violence had violated the Convention Against Torture. It should not be accepted if the state apparatus whose tasks are to protect citizens and abide by law conducted such repressive violence towards civilians. This case reveals the unprofessionalism of military officers,” Hamid as cited in the official release on Tuesday, (4/8/2020).

Regarding these series of violent acts, Hamid said the State should be responsible for the human rights violations that continue to happen in Papua and Papua Barat provinces. Therefore, the Amnesty International urges the Indonesian Government to conduct an independent and transparent investigation in which the alleged perpetrators should commit punishment because apologies and internal sanctions are not enough.

“We urge the State to ensure there is no longer impunity against the law. We suspect that there is a direct relation between law impunity and any failure and delay of authorities in investigating the human rights violations in Papua and Papua Barat provinces. The law impunity is a serious threat to human rights,” Hamid said in the release received by Jubi.

In the meantime, Tambrauw Regent Gabriel Asem has not given any responses to confirm the violence acts by the military until this article was published.

Earlier, a video showing four men in military uniform committed verbal violence against six indigenous Papuans. In the 3 minutes 37-second video uploaded on YouTube TV West Papua on 2 August 2020, those soldiers were shouting to those six locals, which three of them were not wearing clothes, while the incident identified to occur in Kwoor Sub-District, Tambrauw Regency, Papua Barat.

The local sources of the Amnesty International from the Legal Aid Research and Development (LP3BH) Manokwari and the Coalition for Law and Human Rights Enforcement Papua have reported that the incident in the video occurred on 28 July 2020.

At that moment, soldiers from the Army Strategic Command (Kostrad) Kwoor base came to the location where the meeting to settle the dispute among Kosyefo residents took place at 1 pm local time. The soldiers forced the four men—Neles Yenjau (35 yo), Karlos Yeror (35 yo), Harun Yewen (30 yo) and Piter Yengres (27 yo)—to take off their clothes.

According to LP3BH, the soldiers then shouted on those young men and kicked their chest and stomach three times before leaving the scene. The Coalition for Law and Human Rights Enforcement Papua reported that three of four men have recovered and returned to their home in rural Kosyefo while another one is still under treatment by his family.

However, a local media reported that the Spokesperson of Regional Military Command Kasuari denied the violent acts by its members. He clarified that the incident captured in the video was a military method to discipline local young men based on the request by the local community. They often committed vandalism and threatened people when they were drunk.

The violent act, continued Hamid, is a form of torture prohibited in the Convention against Torture and Other Cruel and Inhuman or Degrading Treatment or Punishment (CAT). The convention has been ratified by Law No.5/1998 which firmly declares that each State Participant must take legislative, administrative, judicial or other measures to prevent acts of torture in any territory under its jurisdiction.

Therefore, such violent acts by the military can be categorised to violate this article. The human rights perpetrators must take before the criminal justice system instead of the internal discipline handling system. Although the disciplinary sanction could occur upon the ongoing legal process, it could not replace the trial on the court.

The UN Committee of Human Rights as the authoritative interpreter of the ICCPR (International Covenant on Civil and Political Rights) declares that the State must conduct a thorough and effective investigation on alleged human rights violations immediately. It should establish independent and impartial institutions for investigation and must guarantee the appliance of trials against those who are responsible and to provide the right of reparations for the victims.

“In the national law framework, the rights to not being torture has also been guaranteed in the Constitution, namely in Article 281 and Article 4 of the Law No.39 of 1999 on Human Rights. The law states that every person should be free of any acts of violence and tortures. These rights are absolute and cannot be reduced under any circumstances,” said Hamid. (*)