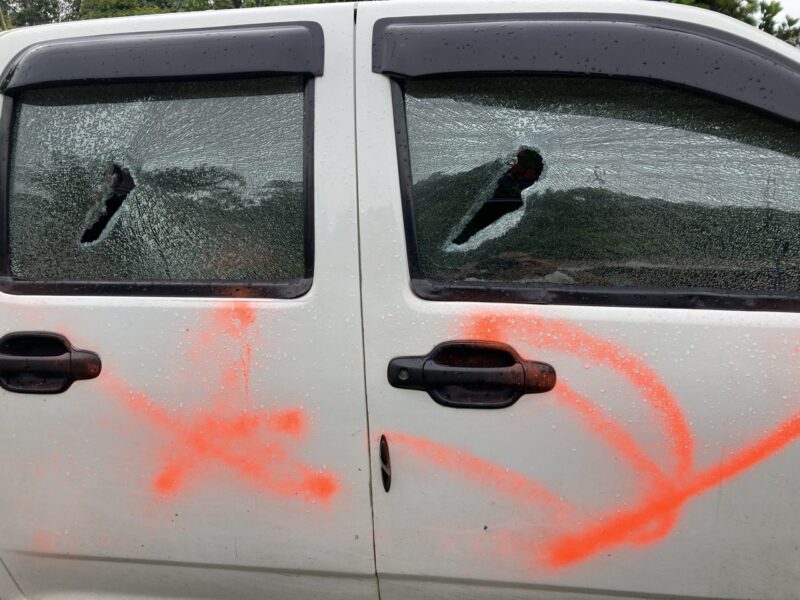 The condition of Victor Mambor's car after the attack. Jubi

Jayapura, Jubi – Independent Journalists Alliance in Jayapura condemned the attack on executive director and guarantor of the Jayapura-based Jubi, Victor Mambor, in which unidentified people damaged his car on Wednesday, April 21, 2021.

“Mambor’s Isuzu D Max car, which was parked by the side of the road beside his house, has been damaged by strangers at midnight, between 00.00 and 02.00 local time,” Alliance of Independent Journalists (AJI) Jayapura chairman Lucky Ireeuw said in a written statement on Thursday.

Lucky suspected that the vandalism experienced by Mambor was related to Jubi’s recent coverage which certain parties disliked. Previously, a series of attacks against Mambor and the Jubi has happened including cyber attack, doxing, libel, and provocation to criminalize the media and Mambor.

“These acts of terror and intimidation are clearly forms of violence against journalists and threaten press freedom in Papua and Indonesia,” he said.

AJI Jayapura condemned the acts of terror against Mambor and the Jubi and demanded the Papua Police to immediately investigate the case and arrest the culprit.

AJI Jayapura also appealed to the public not to abandon the law when responding to press reports. “All press activities are protected by Law No. 40/1999 on press. Press companies are bound to serve the right of reply to any objection against a news report and the objecting party can file a complaint to the Press Council,” Lucky said.

He further asked the public to respect journalism and press freedom in Papua. “Journalists in Papua must be protected in doing their work to serve the truth,” he said.

Triwibowo emphasized that without the right to freedom of expression, and free, independent and pluralistic media,
there was no true democracy.

Therefore, the NGO urged the government to effectively guarantee the safety of journalists, create an environment
conducive for press freedom, and prevent the misuse of laws or provisions
that may affect such freedom

Violence against journalists in Papua and West Papua has been an ongoing issue, perpetrated not only by civil society groups but rather by law enforcers. Police officers appear to have been responsible for a large part of the violence. In 2019, of 53 reported cases of violence against journalists, 30 of them involved police officers.  The most common form of violence was verbal intimidation, physical abuse, forcefully entering and damaging media offices and online intimidation.

325 SOLDIERS SENT IN TO PAPUA