Ahead of WPFD 2017, Papuan journalist injured of being beaten by the police 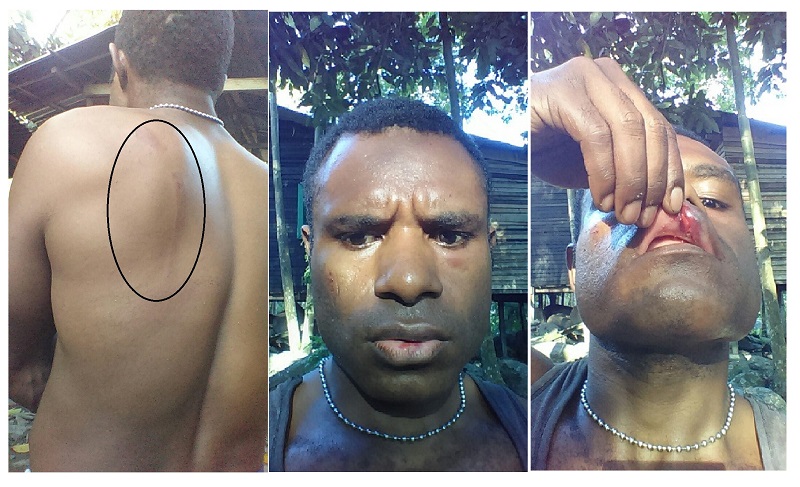 Jubi journalist, Yance Wenda was being beaten by Jayapura Resort Police while he was in duty - IST

Jubi journalist, Yance Wenda was being beaten by Jayapura Resort Police while he was in duty – IST

Jayapura, Jubi – Papua Journalist again experienced violence that allegedly committed by members of the police, Monday (May 1st 2017). The victims were Yance Wenda, Jubi newspaper and online reporter. He suffered a number of injuries on his face for being beaten by several police officers from Jayapura Resort Police.

“My temples are wounded, my eyes swollen, bumps on head, at my back were two rattan strokes, they kicked me on my shoulder too, you can see the trace there, my lips are wounded of being beaten and kicked by rattan,” Yance said on Monday.

He explained that in the morning during Monday on 08:00 AM, there were mass arrest of National Committee of West Papua (KNPB) Sentani, Jayapura Regency that would like to commemorate May 1st as a Day of Annexation of West Papua. They were taken to Jayapura Resort Police and Yance followed the crowd. But he did not go in to the Police station.

“I was away from the masses when the crowd was brought into the Resort Police, I sat on the front of Police station and did not take any picture. I just watched. And soon, a policeman approached me and opened my glasses arbitrary. He asked me (who I am) and I replied I am a journalist,” said Yance.

When he was about to pull a letter of assignment out of his bag, another police officer came then grabbing Yance’s purse. Some police officers then dragged Yance to the Police station while kicking and beating him.

“Arriving at the Resort Police, I was checked, and asked to take off my clothes, they asked me again and I told them I was a journalist, they checked my bag and found my letter of assignment,” he said.

Then they noticed that Yance is a reporter. But they still took Yance to the station on 9.00 AM and released him on 1 o’clock.

Jayapura Police Chief, AKBP. Gustav Urbinas explained by phone to Jubi that Yance was being ‘secured’. He said that could happened because he came with other sympathizers of KNPB who want to check their colleagues who were arrested in the Police station.

“He joined them, he did not use a press card, That is why he was being secured and then we asked, he claimed to be a journalist and when we checked that there was no id card, only a scanned letter of assignment,” AKBP Gustav Urbinas said.

After the police noticed that Yance is a journalist, he was released, but the Jayapura Police Chief denied if Yance Wenda was subjected to violence from members of the police.(*)

BAZOKA LOGO ELECTED AS A NEW SPOKESMAN OF KNPB

NO ALLOCATION FOR WATER DEVELOPMENT BUDGET IN LOCAL BUDGET