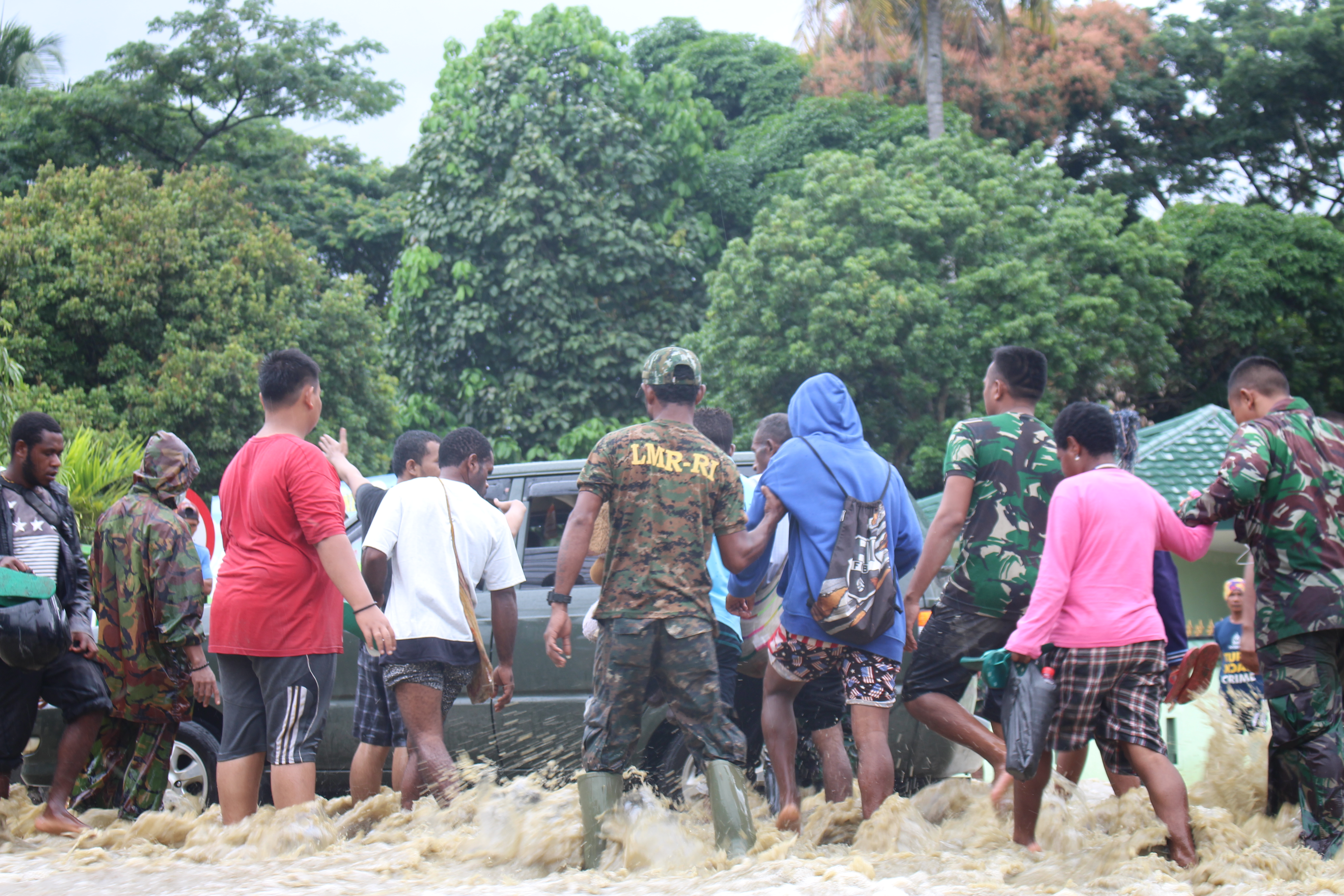 Papua, Jubi – Indonesia has been hit by at least two major floods during this current transitional period from the rainy to the dry season, as high precipitation still occurs in several regions.

Floods have been reported in the provinces of West Java, East Java, Lampung, East Nusa Tenggara, South Sumatra, and Papua, among others. But East Java and Papua have been the worst hit by major flooding over the last several weeks.

In East Java, on March 5, 2019, floods triggered by heavy rains and the overflowing of several rivers, had inundated 15 districts and displaced nearly 12.5 thousand people, mostly in Madiun. Despite the widespread inundation, there were no reports of casualties.

In Papua, however, deadly flooding devastated Sentani and several other sub-districts in Jayapura District, and killed at least 112 people and rendered 94 others missing on March 16, 2019.

The natural disasters caused serious injuries to 107 people and minor injuries to 808 others.

A total of 374 homes, four bridges, five places of worship, eight school buildings, 104 home-cum-shops, and a traditional market were damaged. Furthermore, the natural disasters led to the displacement of 11,556 people.

The Papua provincial government has declared an emergency response period from March 16 to 29, 2019.

The Government has deployed a joint team comprising military and police personnel, among others, to continue search and rescue operations for the victims of the floods in Jayapura. Tens of NGOs have also volunteered in helping the rescue operations.

“Since yesterday evening, our volunteers have helped carry out evacuation, assessment and mud clearance in Sentani,” ACT coordinator Kusmayadi said in a statement, one day after the disaster occurred.

They also distributed some 1,000 packets of cooked food for the flood victims, and set up an ACT humanitarian command post and a public kitchen in Sentani.

As 94 people were still missing one week after the flooding, the Indonesian Red Cross (PMI) held a coordination meeting to discuss efforts to expedite the handling of the impact of the flooding in the country’s eastern most province.

“This meeting aims to discuss and identify various issues concerning efforts to speed up handling and support for the rescue operations by the PMI during the emergency response period,” Sunarbowo Sandi, head of the PMI Headquarters, noted on March 23, 2019.

Arifin M. Hadi, head of the Disaster Mitigation Division of the PMI, remarked that the Red Cross had optimized services and endeavors during the rescue operations following the emergency response status.

Meanwhile, Sutopo Purwo Nugroho, spokesman of the Natural Disaster Mitigation Agency (BNPB), noted in a statement in Jakarta on March 22 that the flooding was triggered by deforestation in the Cycloops area.

“Incessant heavy rains in the Cycloops mountainous area, whose condition had degraded, caused flash floods in Jayapura District and the surrounding areas,” he noted.

The local government in Papua has planned to relocate residents living in the Cycloop nature reserve area in a bid to avoid future flash floods.

Papua’s Governor Lukas Enembe had earlier stated that the residents affected by the natural disasters would be moved to Wamena, Jayapura.

“This plan had been approved by President Joko Widodo. We just have to determine the proper location,” he noted in Jayapura on Thursday.

According to the governor, Papua’s government will discuss building public service facilities, such as hospitals, schools, and housing for the resettled residents.

“This type of disaster has been repeatedly occurring over a period of time, so the residents must be relocated,” he added.

The Environmental Affairs and Forestry Ministry in Jakarta, on March 19, however, denied that the disaster was caused by deforestation.

There was no illegal logging activity in the Sentani areas, according to IB Putera Parthama, the ministry’s Director General for River Basin Management.

There were no logs floating or swept away by flood waters in the area, he added.

“Branches and roots of the floating trees were intact. It shows that the trees were not a result of the illegal logging activity (suspected of having) caused the flash floods,” he told the press.

Sentani located in the Cycloop mountainous area is prone to flash floods and landslides during heavy rain because the area has a steep slope and an unstable river basin, he said, adding that the flooding was triggered by heavy rains that went on incessantly for six hours.

The forest conversion in Sentani was also not significant, as it covered a total area of 495.47 hectares or 3.3 percent during the 2012-2017 period.

“From 2012 to 2017, the forest area converted into non-forest area reached only 3.3 percent. So, it’s not strong enough to associate the disaster with the forest conversion,” he said.

According to the 2018 data, the forest coverage in the river basin area in Sentani was around 55 percent, meaning it was good enough.

The ministry, however, has sent a task force to investigate the cause of the flash floods, he remarked.

The task force is headed by M Saparis Sudaryanto, the ministry’s Director on Planning and Evaluation of River Basin Management

It will collect data and facts about the floods and landslides in Papua to study them for future solutions.

“I will collect facts as accurately as possible,” Sudaryanto said.

The ministry has also set up an information command post to update information on the flooding situation in Sentani.