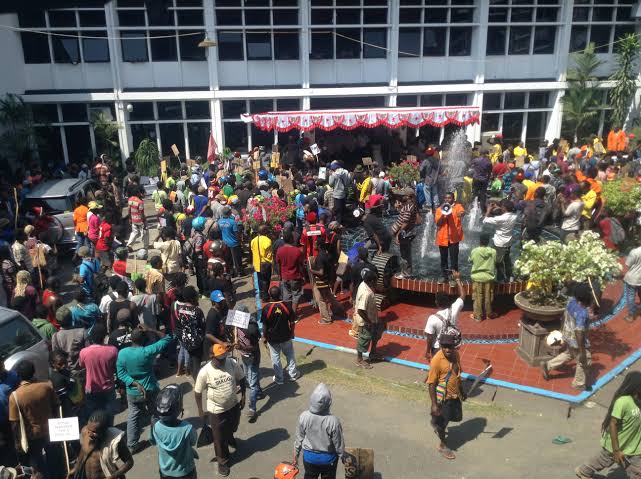 Jakarta, Jubi – Abia Indou, a student of the National University (UNAS) from Papua, is facing expulsion from the university after he and other students were questioning a single tuition deduction (UKT).

“It effectively applied today, as per 13 July 2020, referring to a withdrawal letter issued by the university. It’s questionable because Indou is currently in Papua. He only posted a statement that “UNAS is on emergency” on his Instagram. However, the university authority thought it was inappropriate,” said Maruli Marpaung, a student who held a protest in the campus to defence Abia on Monday (13/7/2020).

Marpaung explained that at least one student obtained a warning letter, and three others had suspended. It becomes a reason for Marpaung and other students in solitary to hold a protest.

“We demand the university authority to revoke the withdrawal letter for those students,” he added.

Marpaung and the solidarity of UNAS students demand the rights for democracy and transparency on tuition fees amid the pandemic from their campus authority. They have protested about the UKT but have never responded by the campus authority.

“They have not even responded to our letter of notification and audience proposal, but issued the withdrawal letter to silence the students,” he explained.

In the meantime, the Dean of the Politics and Social Sciences School of the National University Zulkarnain confirmed the issuing of a withdrawal letter for Abia Indou. He further admitted signing it on 7 July 2020.

“Because he made a mistake by doing a demonstration with his fellow students. Therefore, we gave him a sanction,” said Zulkarnain.

He explained the sanction was pledged based on the recommendation of the campus internal discipline commission team. He claimed Abia Indou was guilty of taking part in a demonstration held in front of the campus. However, other students witnessed that Abia has been in Papua until today.

“According to our internal team, he was at the scene, and participated in the demonstration,” said Zulkarnain.

Moreover, he explained to sign at least 14 letters for students allegedly involved in a series of demonstrations in UNAS.

“If I am not mistaken, there are two or three students facing expulsion, and two suspended for one semester, and 6 to 8 students got a warning. Therefore, there are 14 cases in total,” explained Zulkarnain. (*)