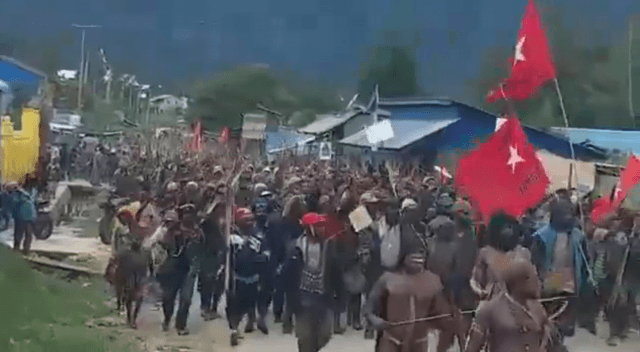 Jayapura, Jubi – A rally to protest racism against West Papuans in front of the Deiyai Regent Office on Wednesday, 28 August 2019, turned to a tragedy. A local parliament member Alfret Pakage told Jubi about the tragic story.

The story began when a young man called Yustimus Takimas died in a car crash involving an Indonesian soldier. His death triggered a mass rampage that ended with the police’s gunshot.

“I don’t have an idea about what was happening at the Regent Office’s backyard because I was standing at the side door watching people coming. After the car accident that killed young Takimai, people killed a soldier who was in the car. Then, all young men joined the crowd. Some entered through the front while others from the back via BKD Office. At that time the joint security force stood at the corner of the Regent Office. I was there too facing the BKD Office,” Pakage told Jubi by phone on Wednesday, (11/9/2019).

Furthermore, he said the mob threw stones to the soldiers, and they responded it with tear gas shots. However, when they found out a soldier killed, they threw bullets against the crowd. “I told the Crime and Investigation Department Chief of Paniai Police to hold. It happened when they (security force) knew a soldier died. They shot their guns to the people,” he said.

Then, the Military District Commandant immediately came out of his office located across the street in front of the Regent Office. “He shouted ‘my soldier is dead. Where’s the Regent? He must be responsible for this. The soldiers took their gun out. Brimob personnel were also there,” he said.

Pakage was alone at the scene, while the regent, deputy regent, local parliament members and all government officials already left their office. The police step on the body of the dead victim lying under the flagpole at the office’s front yard.

“I shouted at them to stop.” While he was confused about how to stop it, he also could not do anything because he was alone and under gun threat.

“I saw people died lying under the flagpole. It’s just me. I was alone. When the soldiers found out that people taken away their guns, they prevented me from being a mediator. They even pointed their guns against me and said ‘you want to back up or not? If not, you’ll be responsible for this’. After that, I backed up. But I still told them not be overwhelming,” he said.

Furthermore, according to Pakage, he moved to a kiosk opposite the Regent Office to join some police officers of Mee origin. It was only 17:12 but already so quiet, and nobody dared to pass. He then saw the ambulance from Deiyai Public Hospital going to the scene.

“I saw the ambulance coming from Deiyai Public Hospital to collect West Papuans who injured and fell because of the shooting. But the police came to block the car, pulled out the victims and took the ambulance’s key. They put their injured friends (soldiers), sent both driver and medical workers home. Then ambulance went to Paniai and left the injured West Papuans,” he said.

It was getting late, so he hurried to go home. He reminded himself that he must keep safe from the danger. Of returning home, he observed that Waghete became so quiet. Only found the security forces standing along the street from the Regent Office to Waghete II until the airport compound.

On the next day, Thursday (29/8/2019), he returned to the scene to check whether the dead bodies are still there or taken to the hospital.

“I only saw the soldiers standing along the street. I didn’t meet any residents. First of all, I checked the Deiyai Public Hospital, but the gate was locked and no activities there. I came inside knocking the door but no one there. So, I went to the scene to check whether the victims are still there or not. So I parked my vehicle at the entrance of the Regent’s office. Suddenly, the joint security force came investigating me with anger.

“They asked, ‘where are our guns?’ I told them I am also a part of this country. Those weapons are the state’s tools; I try to find those losing guns. However, the victims were not there anymore. So I went to Damabagata, Tigi Timur sub-district because I heard from someone that they keep the weapons there. At that time, the Military District Commandant was well-equipped guarding at the intersection of Waghete, Dogiyai and Paniai,” he said.

He continued the story by saying that the Paniai Police then asked him to come to their office as a witness. “At that time, the police acted without thinking. It was a big mistake. They examined me as a witness at the regency police station,” he said.

Meanwhile, Father Santon Tekege Pr said the investigation of the Secretariat of Peace and Justice (SKP) of Paniai Dean – Timika Diocese concludes that a car accident involving a soldier that caused the death of Yustinus Takimai triggered this shooting incident.

“As a result of the gunfire and tear gas shots, seven civilians were dead, while 43 people injured with both minor and serious injuries,” said Father Santon. (*)