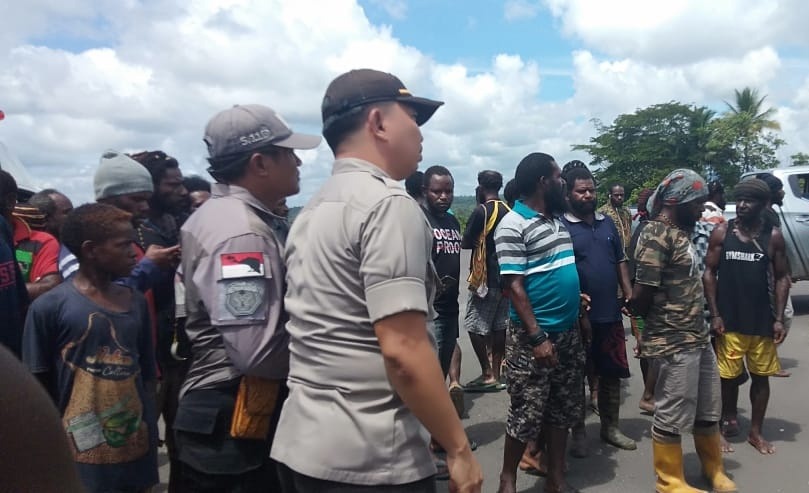 A rally in Nduga. Residents held a protest at Kenyam Airport on Saturday (21/12/2019) regarding the shooting on Hendrik Lokbere. – the courtesy of Jubi

Jayapura, Jubi – Hendrik Lokbere, a resident of Kenyam of Nduga Regency reportedly shot on Friday (20/12/2019) at 7 p.m. Papua time. Lokbere, who was a public transport driver, was travelling to the border of Asmat Regency to pick up his passenger.

Lokbere’s relative Samuel Tabuni said the family confirmed Lokbere was passing down Yosema road where he gave a sign to a group of vehicles by turning his car’s headlights. It found that it was the security forces’ vehicles. “The security forces suddenly shot their gun and hit Lokbere on his chest,” said Tabuni on Sunday (22/12/2019).

Tabuni said that Lokbere’s uncle, who was with him at the time, jumped out of the car immediately. While Lokbere was trying to reverse his car but struggling because it was on the climb. The security forces then neared the car and ordered him to open his side window. When it opened, the security forces pointed a gun facing him and dragged him out of the vehicle. Then, they shot him once again within a short distance where the bullet went through his neck. Watching this upon his eyes, his uncle ran away immediately to escape from the scene.

According to his family, Tabuni said there was a firefight between the Indonesian security forces and the West Papuan National Liberation Army from the morning until late afternoon at Kenyam Road to Batas Batu on Friday. Lokbere came by to his sister’s house to buy gasoline at 3 p.m. Papua time.

He told his sister that he wanted to pick up his passenger at the border of Nduga and Asmat regencies, but his passenger could not pass Kenyam due to the armed conflict. His sister then told him to hold his plan because the area of Batas Batu where he should pass by still happening the firefight.

“At around 7 p.m. Papua time, Lokbere thought the situation was quite conducive, so he asked his uncle to accompany him to the border (Nduga-Asmat). But, they shot him while he was in the car,” said Tabuni.

They just left his body at the scene before his family, accompanied by the vice-regent of Nduga, came to take his body on Saturday. The residents then took his body to Kenyam Airport for a protest. They asked for clarification from the Papua Police Chief and the Regional Military Commander of Cenderawasih.

Tabuni admitted that he already contacted both police chief and regional military commander for further clarification. “Together with their investigation team, we would go to Nduga for examining the current situation there,” he said.

According to his family, Lokbere had a genial personality. He was friendly and helped those who need help, including the security forces.

Regarding the shooting incident on Lokbere, Jubi attempted to ask the Papua Police Chief for a clarification. However, he did not reply to the questions either through Whatapps nor a mobile phone. (*)