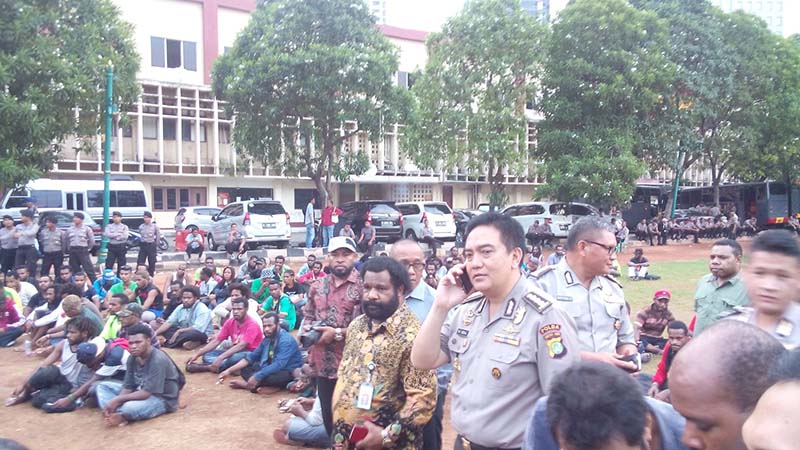 Semarang, Jubi – Dozens of Papuan students activists were arrested during a street rally in Jakarta to commemorate the political manifesto day that is regarded by many Papuans as their national day.

From Jakarta, the Alliance of Papua Students (AMP) chairman of Kota Semarang Committee, Bernardo Boma told Jubi he and other student activists were being detained at Polda Metro Jaya (Jakarta Police Headquarters).

“I am currently detained at Polda Metro Jaya with other AMP activists. We were headed by the police before the rally,” Boma told Jubi by phone on Tuesday (1/12/2015).

He explained, besides him, some activists who came from Cawang, Tangerang and Bandung to Jakarta also blocked by the police, so now their position was under the police’s control.

“The fact is the Central AMP has sent a notice to the police long before the rally. We did it to respect the Indonesian democracy and legal system. But before we run the rally, the police have deployed its full-equipped troop. We regret it,” explained Boma.

Meanwhile, the activist from AMP Kota Malang, Wilson Nawipa told Jubi the same thing but in more detail. “Today we were headed and suppressed by the police.

Now about two hundreds of student activists were detained at Polda Metro Jaya. Two activists were reportedly shot by the police,” he said. However, he could not provide more detail information about the shot activists.

“I will give the chronology and the names of arrested students soon after I get detail information,” he said.

Director of Jakarta Legal Aid Institute (LBH Jakarta), Alghiffari Aqsa told Jubi the police have not only forced the crowd to disband, but also arrested them brutally.

In this case, the police had no warrant, so the arrest considered illegal by Law. 128 activists were reportedly detained.

This incident is not the first time to be happened, but has repeatedly occurred.

Similar with Aqsa, the Division Head of Case Handling Division of LBH Jakarta thought the forced dissolution, the arrest and repressive act by the Police is an abuse against the right of freedom of speech in public. “It’s regretful, the law enforcement authority should be respect, protect and fulfill the human rights without discrimination, including towards Papuans,” he said.

For that reason, LBH Jakarta demanded the Minister of Legal, Politic and Human Right Affairs, Indonesian Police Chief, and Metro Jaya Police Chief to release the activists of the Alliance of Papua Students of Java and Bali. “Respect, protect and fulfill the right of the freedom of speech in public!” stated Aqsa.

On Tuesday (1/12/2015) night, most students was released by police. But two students are still being detained for questioning. (Arnold Belau/rom)

THE LARGE SCALE FOREST CUTTING FOR THE MIFEE PROGRAM PROGRAM