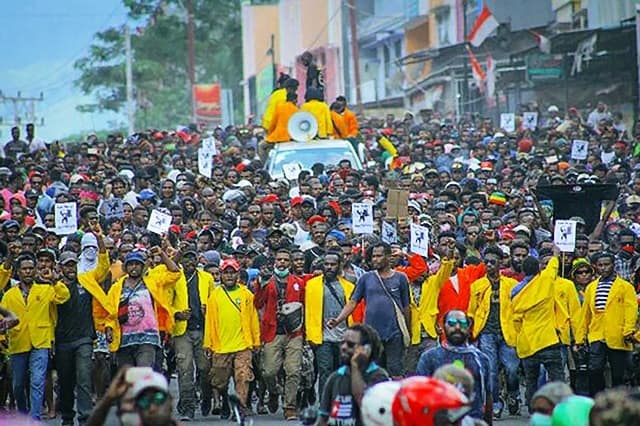 Jayapura, Jubi – Surveillance, intimidation and harassment, protest dispersals, torture, arbitrary arrests and extra-judicial killings continued in the Indonesian provinces of Papua and West Papua, and in Indonesia more broadly, as the state tried to crack down on the contentious issue of West Papua’s self-determination in 2019.  Alarmingly, the Indonesian Government also used new tactics such as internet shutdown and cyber-attacks during the anti-racism protests and riots which culminated in the ‘West Papuan Uprising’ in August and September 2019.

Last year, the Indonesian security forces arrested more than 1300 in demonstrations, peaceful rallies and gatherings that were related to West Papua. The majority of arrests took place in West Papua (Papua and West Papua Provinces) totalling 1175 people. The largest mass arrest was 756 which took place in September in West Papua during the Uprising. Outside West Papua, there were a total of 173 people arrested across the provinces of Bali, Maluku, North Maluku, East and West Java, North Sulawesi and Jakarta. By the end of 2019, 120 people had been charged of which 86 were charged with treason. These arrests were part of the police and authorities tactics to crack-down on political activities related to West Papua’s self-determination.

While the majority of arrests were taking place during the West Papuan Uprising which took place between August and September 2019, lower level of arrests, intimidation and harassment occurred, targeting the political activist groups such as the West Papuan National Committee (KNPB), the United Liberation Movement for West Papua (ULMWP), Papuan (university) Student Alliance (AMP) and the Indonesian People’s Front for West Papua who are largely peaceful political activist groups. Non-political activist groups such as the human rights activists, Papuan Customary Council, women’s groups, university student groups, farmers and journalists experienced various forms of abuse from the state authorities. Some of the protest dispersals were forceful with protestors experience beatings from nationalist groups or torture from the state security forces. At least 20 people were killed in a direct action by police to disperse anti-racism protests in West Papua in September 2019.

During the Uprising, the Indonesian state also used new methods such as blocking internet access in West Papua. The Indonesian Government’s declared reason was that it was to prevent the spread of ‘fake news’ however it was a clear attempt to prevent information coming out of West Papua. Although the method was new it clearly followed a well-established pattern of violation of freedom of expression and assembly around the world.

We say ‘don’t make native Papuans suffer’, and they call us separatists: Legislator