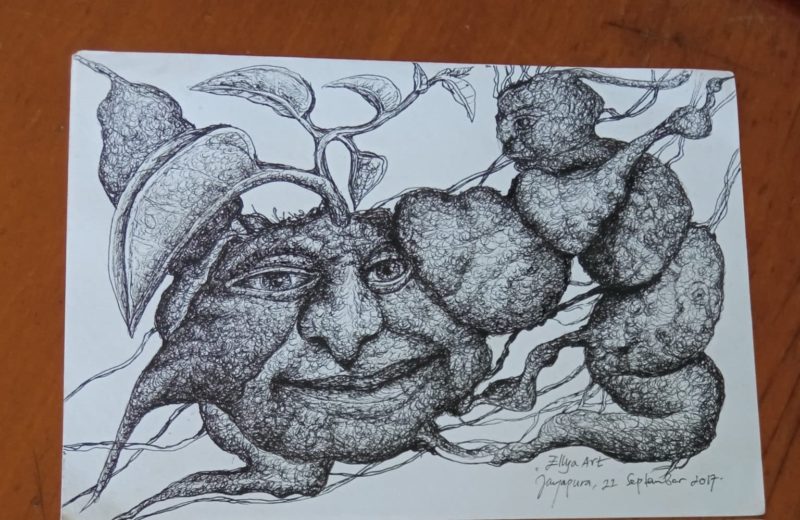 One of the sketches by Ellya Alexander Tebay, a West Papuan artist, which depicts Papuan local food, sweet potatoes.

Nabire, Jubi – Visual artist from West Papua, Ellya Alexander Tebay, has taken inspiration from Papuan local food, sweet potatoes or “ubi” in Indonesian, to express his lament for the declining existence of the food in the realm of native Papuans’ live.

Sweet potato is native Papuan local food for a long time, but now it has been replaced by other sources of calories, especially rice. Mee tribes call sweet potato “nota”, Lanny tribe called it “mbi”. His concerns for the declining popularity of sweet potato among native Papuans are in line with his concerns about the future of Papuan people themselves.

Tebay said the sweet potatoes he sketches were the kind that Papuan residents could see in the market, sold by women traders usually called “mama-mama Papua”.

Tebay said with his sketches, he wanted to remind each Papuan of the aroma of sweet potatoes. He wanted to tell a story about sweet potatoes that were on the decline. “Through sweet potatoes, I wanted to convey our concerns. I don’t regard them only as the food we eat, but it is also the symbol of our culture,” he went on.

The sweet potatoes in one sketch had a human face: a nose, a mouth, and eyes that gazed softly. In another sketch, the sweet potatoes shaped like a body that was wrapped, bound. “The sweet potato is telling us, it is sick. The body is suffering. It is the same with the sufferings of Papuans,” he said.

Tebay said he noticed that some varieties of local sweet potatoes had gone from the markets.

Indonesia’s food security strategy employed an approach where rice, a staple food for many people in Java, became the main, almost the sole acknowledged staple food. Rice had been regarded as more modern, and such belief sidelined other staple food from local cultures.

Such food politics has been criticized by a lot of food security researchers because they saw that diversity was better to reach food security. Heavy dependence on rice would make some cultures vulnerable to food shortage because they depended on rice imported from other regions even from abroad. Every year, Indonesia imported rice from other countries like Vietnam.

In East Nusa Tenggara (NTT), for example, several civilian groups had tried to revive their local staple food, sorghum, to reduce their dependency on rice coming from outside NTT.

In Papua, besides sweet potatoes, Papuans depended on their local food, grown on Papua Land: sago. However, researches showed that sago has been threatened by commercial plants like the palm.

“We no longer eat sweet potato. Just like Papuan people, sweet potatoes and we humans are both neglected,” he said.

He said if sweet potatoes could talk, they would ask native Papuans: why did you forget about it? Why did you let us extinct?

“I won’t be surprised if one day, native Papuans would become strangers on our own land. Or maybe we would move to another nature because we consume different food?”

A renowned Papuan chef, who is called Papua Jungle Chef, Charles Toto, said the Agriculture and Food Agency in Papua province should have stepped up their role in protecting the diverse varieties of sweet potatoes and other local food. “If the varieties are declining, they have to move fast to protect them together. Don’t just let it become history,” Charles said.

Charles said the change in the native Papuan diet was not the only thing to blame. He pointed out that massive deforestation in Papua had degraded biodiversity in Papua, forcing several local food varieties to go on the decline. “We have to protect our environment so our local food is protected and sustainable,” Charles said.