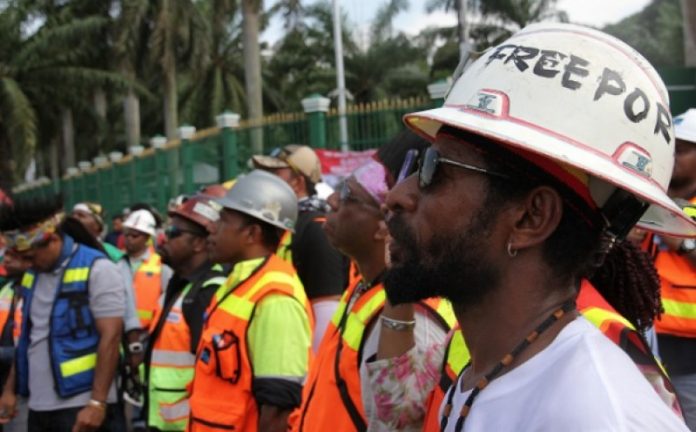 Jayapura, Jubi – The labor disputes between employees and the world’s largest gold mining company, Freeport McMoran is getting fiercer. The company’s workers say Freeport has eliminated the future health of the workers and their children due to the layoffs some time ago.

ABC news has released that a global union came to Jakarta to lobby the Indonesian government to help workers resolve their disputes. There are about 4,000 workers who have been laid off by Freeport since last year.

Thousands of workers said they were laid off because they were involved in a strike because of the unpredictable situation in the company since it was at odds with Indonesian government over the extension of mine permit.

Freeport said that the workers were considered to have resigned because they violated their employment contracts.

Andrew Vickers of The Construction, Forestry, Mining and Energy Union (CFMEU) Australia says education for working children, and health rights have been withdrawn by Freeport.

“We have seen cases of people being discharged from the hospital as a consequence, tragically we are told that 10 people have died after being rejected by the hospital due to a lack of healthcare coverage (from the company),” Vickers said.

“We also understand that without income guarantees, banks seized the mortgages. This is a very tragic situation that occurred in West Papua as a consequence of this labor dispute,” he continued.

Vickers said that this is a “terrible” offense against human rights and workers.

“In the case of PT Freeport, in the vicinity of Grasberg mine, West Papua, the company has so much power and so much control,” said Adam Lee of IndustriALL Global Union, who has also traveled to Jakarta.

“This situation can really affect the school so that the children of the workers cannot get education,” he added.

Unions have demanded access to the mine site to get better and clearer information about all impacts of what the company does. “Unfortunately, the company does not give permission to the union or the media to go up there,” explained Lee.

Freeport spokeswoman Riza Pratama told ABC that the worker was deemed to have resigned and the company was not obligated to continue paying them, including providing school fees for their children.(*)

Murder and violence, does insecurity in Jayapura is by designed?

When a dense forest turns into an oil palm plantation